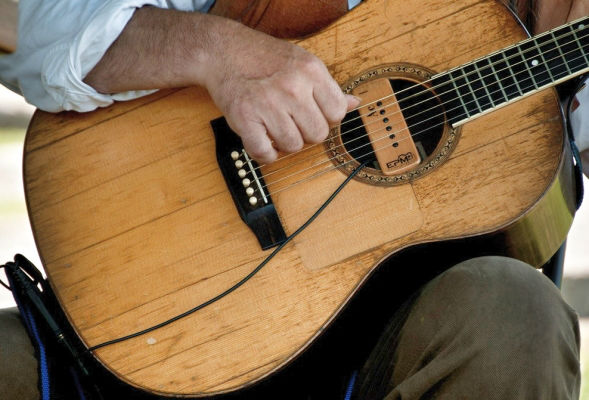 In this lesson, we will look at 3 simple fingerpicking patterns for you to learn and master.  Then we shall look at how simple it is to make great fingerpicked music – we simply keep the pattern the same throughout and add it to a cool chord progression.

That’s great news for us as it means as long as we know some interesting chord progressions we will be able to create interesting and sweet sounding music on the fly. All you have to do is master the finger picking pattern first. All 3 patterns are used in a variety of songs and I’ll go through an example of a popular song that uses each pattern. Cool, yeah!

Ready to charm the pants off your loved one? Yep, fingerpicking is like Casanova in your hands, you don’t need a silver tongue when you can play sophisticated fingerstyle patterns with your fingers.

One thing to keep in mind when fingerpicking is that more often than not the:

There are of course exceptions to these rules but it’s good practice to follow the above whenever you can. Play the following 3 patterns using the above rules and all will be cool.

Pattern 1 is a simple fingerpicking piece based in 4/4 time. It is an ‘up and down the strings’ type pattern that suits any tempo. The example I have created below is a fairly simple 3 chord sequence based in the key of A Harmonic minor that sounds good slow and fast.

The next example uses the same pattern but only for the first 3 bars. If you were around and watching MTV2 in the early noughties, you will know the song ‘Wherever You Will Go’. If you have never heard it before, where the hell you been? I love to show examples of the things I teach in real world scenarios.

The song is played with a capo on the 2nd fret. If you don’t have a capo, well, you can always play it without one (not along with the recording though), you’ll just have to learn to sing even lower than The Calling’s Alex Band – for most of us mortals, that just ain’t possible.

Notice the pattern is the same for the first three bars (only with the thumb changing to fit with the correct root note for each chord). The fourth bar is a different pattern altogether. In music, we often get a variation or something different in the fourth bar.

We are switching it up for pattern number 2 and changing to a 6/8 time signature. A lot of people stress about time signatures, but there really is nothing to worry about – especially with 6/8. All the 6/8 means is that we have two beats; and each beat is split into triplets. 1,2,3, 1,2,3 is the way to count it.

Anyway, this ain’t a music theory lesson and the best way to understand any time signature is to play in it. This piece is a little unusual in that there are rests thrown in to create a bit of dramatic effect.If we count 1,2,3, on every 3 we cut that note short. It gives it a tight but dramatic sound.

‘3 Libras’ by A Perfect Circle (one of my favourite bands) use this pattern to great effect on their early noughties hit and that is our next example. It such a simple song in terms of difficulty. It’s one of those that sounds a lot harder to play than it is – we got to love that!.

The tuning on the original is standard tuning BUT with each string tuned down 3 semi-tones which is C#, F#, B, E, G#, C#. It looks scary written out like that but believe me it’s not. It’s just a deeper version of our usual E, A, D, G, B, E tuning. In this low tuning we can still play everything exactly like we would in standard tuning – it will just sound deeper.

We are switching up time signatures again and this time going into 3/4 time. 3/4 is fairly simple and is often mistaken for 6/8 time. There are subtle differences between the two usually made more noticeable when you hear a drummer play. The main difference is that in 3/4 there are 3 definite beats and in 6/8, there are just two – but honestly with experience this will all makes more sense if it doesn’t already. This is a lovely, simple pattern that you can apply anywhere, anytime.

The example that uses the pattern is Simon and Garfunkel’s superb arrangement of ‘Scarborough Fair’. I get funny looks off my rocker mates when I tell them how cool this song is – until I play it that is. It a wonderful track and their live version from Central Park, New York is really great.

This pattern here is the two bars that signify the song, being the stock ‘go to’ phrase played at various points throughout. Yes, that are lots of other little patterns mixed in with the song too, but this is the main one.

What’s that you say, you want to learn the whole song. Okay, then I have created a tutorial for it. You can check it out here.

There you go – 3 really cool fingerpicking patterns in 3 different time signatures that sound good fast and slow, and can be called upon in times of great need. Like when someone you fancy wants you to write them a song. We have all been there.

Simply pick your favourite, most romantic chord progression (more on those in another lesson) and play one of these delightfully sexy fingerpicking patterns over the top.

You’ll be sure to get some romance that night. You’re welcome. 🙂

P.S. Want some more help with your fingerpicking patterns? You can get the 5 star rated eBook HERE.