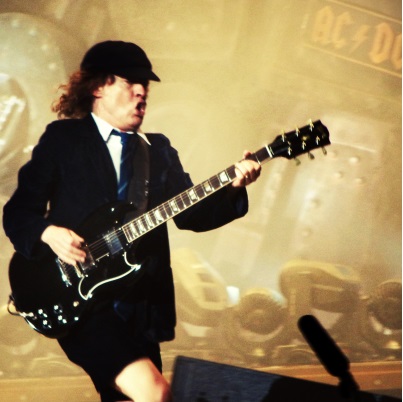 You have got to love Angus Young if you love rock ‘n’ roll. Somehow, he still gets away with wearing a school uniform even though he is in his late fifties. Part of the legendary AC/DC since the birth of the band, he and his brother Malcolm have created many of the most recognisable riffs in rock history such as Back In Black, Highway To Hell, and Whole Lotta Rosie.

Yes, they are fun, yes, they don’t pretend to be miserable or overly artistic, but do they know how to rock? YES, they do. We can all take inspiration from the great AC/DC and their axe wielding maestro, Mr Angus Young. Here are ten of his most funny, awesome and inspirational quotes.

“A lot of people say, ‘AC/DC – that’s the band with the little guy who runs around in school shorts!’

“I saw Deep Purple live once and I paid money for it and I thought, ‘Geez, this is ridiculous.’ You just see through all that sort of stuff. I never liked those Deep Purples or those sort of things. I always hated it. I always thought it was a poor man’s Led Zeppelin.”

“I honestly believe that you have to be able to play the guitar hard if you want to be able to get the whole spectrum of tones out of it. Since I normally play so hard, when I start picking a bit softer my tone changes completely, and that’s really useful sometimes for creating a more laid-back feel.”

“Actually, because I’m so small, when I strike an open A chord I get physically thrown to the left, and when I play an open G chord I go right. That’s how hard I play, and that’s how a lot of my stage act has come about. I just go where the guitar takes me.”

“Style, I didn’t think we had any! I just plug in and hit the thing really hard. That’s my style…or lack of one!”

“When I’m on stage the savage in me is released. It’s like going back to being a cave man. It takes me six hours to come down after a show.”