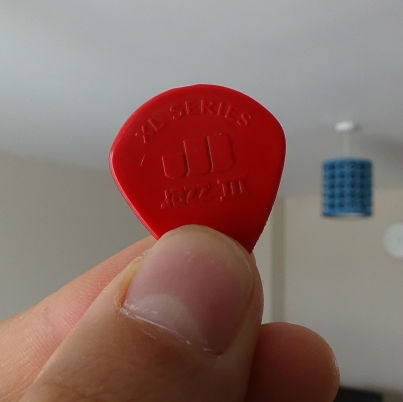 I cover pick choice and pick technique in detail in my course Rockstar 101 – Essential Guitar Skills For Beginners but today I’m going to give you some specific advice about choosing the best guitar pick.

A few hours ago I finished a lesson with a student who has been playing for roughly 9 months and is making great progress. We had a very productive lesson, and it’s a lesson I often enjoy teaching as it’s one those lessons where a small change makes a BIG improvement for the student.

It is the lesson where I go though which I deem are the best guitar picks – especially for beginners. I show the student a variety of guitar picks and we look at which ones are suitable for which type of song, guitar and genre of music.

By the end of the lesson my student knew exactly which 3 picks he likes for which song, guitar and genre and we both both noticed big improvements in the sound coming from his guitar.

Choosing 3 picks is something I recommend you do too.

How many different picks do you use at the moment? And more importantly, when you grab a pick to play with, do you choose it because you know it will sound good for that certain song or because it’s the nearest one to you?

So many guitarists just grab whatever pick is nearest to them. Things like those awful cheap nasty Tiger picks. If you use those I recommend you leave this page and go and watch some You Tube videos titled ‘cat playing guitar’ or something like that. 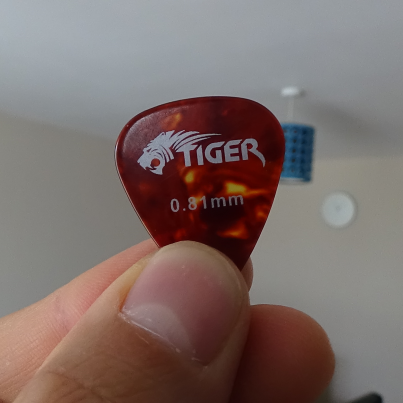 I’m kidding of course, I want you just to see the error of your ways.

Tiger picks are crap, not as crap as Will Smith’s wife’s metal band but crap none the less. You want to get yourself some high quality picks. The difference a good pick makes is huge.

The best guitar picks I recommend are the Dunlop Nylon Series of picks.

If you like to strum an acoustic guitar, go for the lighter one – 0.46 is the most popular for most beginner guitarists that I teach. They sound rich, have a lovely ‘zing’ across the strings, and are thin, therefore easy to control. 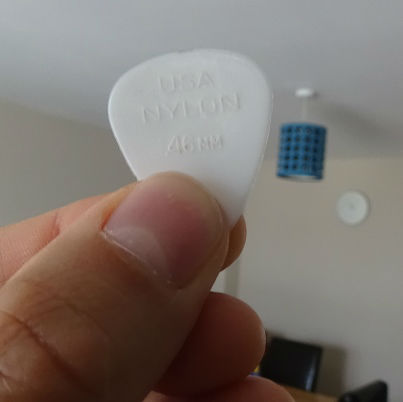 For songs where you pick chords rather than strum them, then try something a little thicker, such as the 0.55 or 0.73 – they are definitely two of the best guitar picks for beginners.

You will find chord picking sounds quieter than strumming, (that’s because it’s one string being hit at a time as opposed to six when you strum), therefore having something slightly thicker helps keep the volume at an audible level.

Having a slightly thicker pick for chord picking will also help you hit the right string more often. This is because thinner picks are great when strumming but bend too much when chord picking which causes a lack of control and the wrong string being hit. 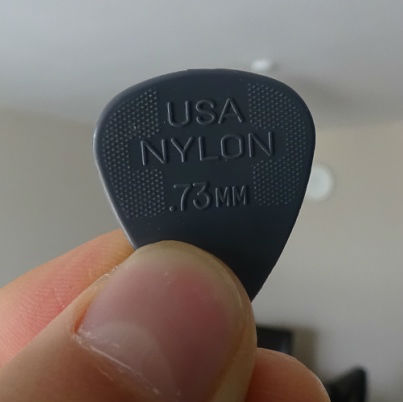 For any single string riffs (think Led Zeppelin or Metallica style riffs) lead guitar (any of those widdly 80’s virtuosos or douchebags as they are often called – not by me though), or fast jazz players, thicker is better, 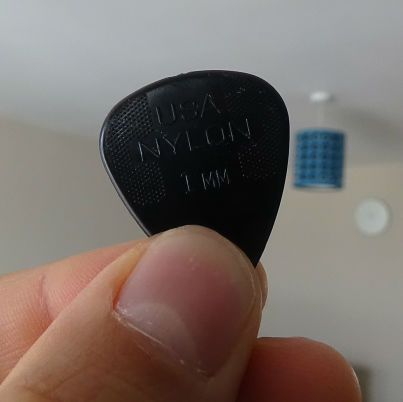 If you have played for years and can control a thicker pick, go for the Dunlop Jazz iii XL. I love them. I can’t believe no one told me about these until about 5 years ago.

Before I used those, I would use a multitude of different picks, never settling on any particular one as when I would get all sweaty on stage, they would fly out my hand and disappear somewhere in the audience. I’m sure I once ‘flicked’ one in someone’s drink, or maybe I just wish I was that cool.

I used to be the world’s worst culprit for using the wrong pick. When learning, I would often lose all my picks or just be too lazy to go and grab one, instead using a 2 pence coin (thinking it was cool and anti-capitalist or something like that) when I was a dorky teenager.

I’d be sitting there strumming a bunch of cool, simple chords and writing some songs.

The 2p sounded terrible and made everything harder.

Well, we didn’t have a guitar shop close by and Amazon hadn’t been invented in 1999 as far as I was aware, so it was either hunt for my favourite picks, use the 2p or use the corner of a cut off butter tub (that’s a story for another time).

Anyway, the Dunlop Jazz iii XL is about 1.38mm thick and sounds great and has an awesome grip. No more wasting them in someone’s Gin and Tonic any more.

A lot of students enjoy playing with a wood guitar pick which is becoming a little more common these days, so that’s a possibility for you too if you don’t get on with nylon, tortex or the other standard materials.

Best guitar picks for beginners (as chosen by my students)

The following three picks are the ones my students have chosen as their favourites. If you struggle to get a good, solid sound from your pick, try these three picks for these three styles of playing:

If you are super picky (excuse me, had to be done), then you could always head to Pick World and get yourself some custom made personalized picks, then you could be the coolest player in town.

You can even get engraved guitar picks and if you are true guitar geek, a guitar pick necklace – I love the guitar, but geez, that’s too far for me.

I must have gone through this process with dozens of students and each time they all say something along the lines of “wow, I can’t believe how much difference a pick makes”, and see instant results in their playing.

They not only feel better when playing, but they sound better, which in turn makes them feel better and so on.

Go and try these picks out now, and go and experiment with more. It’s time well spent, and this is coming from the guy who was too lazy to walk past this 2p coin to pick up his favourite pick.

Enjoy the big improvements that choosing the right pick will make!