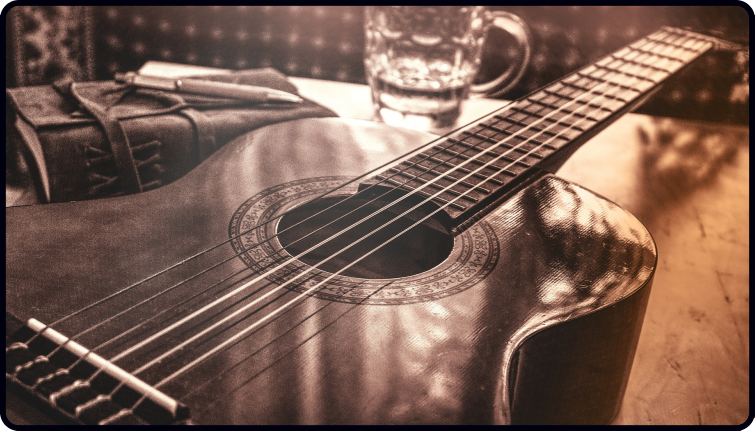 “I’ve been trying to play this song for months, but it seems to be getting worse.”

Those are the sort of comments I’ve heard a lot from students when they tell me they try to learn songs from random YouTube videos.

I used to curse to the high heavens, shake my fist and say the same sort of thing too, back in the day.

In fact, I struggled for way too long on the guitar.

Back about 20 years ago, I had been doing the typical thing of trying to strum chord-based songs for too long.

…And with no one, not even myself, being able to recognise what I was supposed to be playing.

I had painful, awkward, slow chord changes which created Grand Canyon-sized gaps in the music.

To make matters worse, half the time my chords buzzed and when it all clicked (so I thought), I played a song to my sister as she walked past my bedroom.

She did not look impressed as she shrugged and said,

“What’s that?” in a condescending tone that only an older sibling can give!

I’d put hours into that song, but she flippantly dismissed it.

Gut-wrenching for sure and it really made me question what the heck I was doing.

The thing is, learning songs should not feel as painful as sticking your hand in a pot of boiling water (although back then I’d probably have thought that might be a more pleasant option than playing guitar).

Instead, songs should be fun.

How I stuck with the guitar I’ll never know!

…But one of the moments when it all changed for me was at Christmas that same year….

Someone had sent me a Christmas card and on the front were the musical notes for “We Wish You a Merry Christmas”.

I couldn’t play guitar very well, so to comfort me I’d already learnt to read music (just enough to get by).

So, I read what the notes were on the front of the card and started fumbling through the song.

Oh my gosh, I couldn’t believe it

And as I practised it a bit, it sounded really cool.

It wasn’t Clapton-esque but for me, I felt like a rockstar right there and then!

Even my sister recognised the tune when she walked past my bedroom and started singing along.

This was one of those simple moments when I thought,

Obviously, I kicked on much further than that over the years, but it was a really important lesson…

It was the first time I’d discovered the power of simple melodies.

…And if you’ve been frustrated by the guitar, have struggled to play songs, or find the songs you can play, don’t quite “flow”, you might want to try this…

You can listen to this simple but elegant version HERE.

In the new Dan Thorpe Acoustic Academy lesson, I teach the song in a way that brand-new beginners can learn while having it sound pretty darn cool. (As well as sounding like the actual song right away).

Basically, in the video and TAB, you will learn it in two ways.

1 – The simple melody. Firstly, we will play the pure melody of the piece, one note at a time and on one string at a time.

2 – The alternative way of strumming it. Secondly, we will learn how to strum it, but not in the “normal” way. In fact, we are doing it using some of my favourite chords, called “chord anchors”. These make changing chords easier, and they sound super lush too (and this lesson is especially useful if you struggle with the C Major chord).

Plus, to give you even more fun and help you learn the parts faster, I’ve created a variety of backing tracks for you to play it with…

If you’re new or you’ve played for a while, you’ll love this lesson I’m sure, as I’ve never met a guitarist, no matter how good they are, who doesn’t get pleasure from playing beautiful but simple music.

Either way, this song is a winner.

The deadline to get it though is midnight tonight PST time.

Check out the Dan Thorpe Acoustic Academy before the midnight deadline