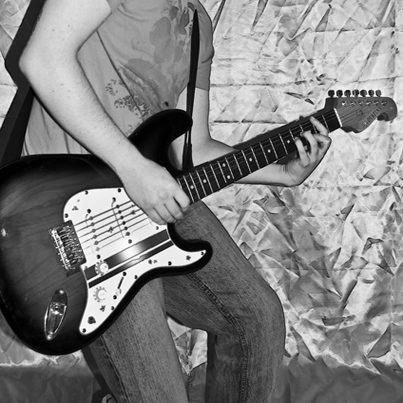 Have you ever gone to learn a song, looked at the chords, seen a b minor, then with a shriek and look of horror ran off and never looked at the song again?

Ok, that might be an exaggeration, but a lot of guitarists fear the B minor on guitar. Yes, it is a scary chord at first and a little difficult to play (but there are easier ways, as you’ll see below), but the b minor chord is so useful and is featured in so many classic songs.

There are a lot of songs that use the B minor chord, and these are a bunch of classics that use it – though there are lots more:

Below are 8 different but very useful ways to play this chord and they are ordered from hardest to easiest (from a general point of view).

How To Play The B minor Chord on Guitar

You’ll find they all have a slightly different flavour. This is due to the number of strings played in each version, their location on the fretboard, and other factors. 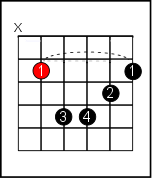 This is the most common shape and the one you will want to build up to. This version is based off the A minor shape. This chord is simply an A minor chord with a barre placed in front of it and moved up two frets.

This is the starting point AND probably the one I use the most.

This version can be easier or harder than shape 1. It really depends on your finger strength, your four finger independence and the action of your guitar. This one is based off the E minor chord shape and is played at the 7th fret.

You won’t play this one with many open chords, so it is slightly less useful than shape 1 but is still a must-know (eventually) shape. If you play this version at the first fret, it becomes an F minor, which is a very useful chord in its own right. 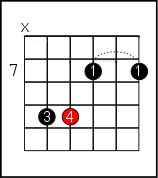 This is shape 2 but simplified a fraction. It’s still tough, but instead of barring across all 6 strings with the index finger, we are just barring across the G, B and high E strings. You’ll still need some good finger independence between the index and ring and pinkie fingers.

This makes a great substitute for shape 2 when you still need the B note on the 7th fret high E string (e.g. for picking songs), but you struggle to barre across all six strings. 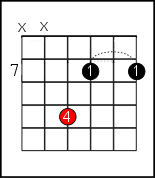 This is very similar to shape 3 but easier. Instead of using the ring and pinkie fingers, we have simplified it to use just the ring finger along with the index finger playing the mini barre.

It’s still tricky, so make sure the action of your guitar is at the optimal height, and keep practicing it in small doses. Just like shape 2 and 3, when played at the first fret, it is an F minor, which is a handy chord to know. 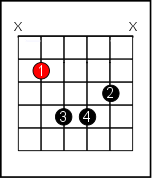 Each finger just plays 1 note. This version still sounds great and is super useful, so I recommend all beginners try to master this version. It will come in handy and is a nice way to build up to the tougher shape 1. 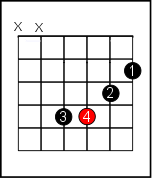 Shape 6 has to be one of the most useful. It is based off the A minor shape just like shape 1 and shape 5, but no barre is needed at all. Instead, we are playing the top four strings with our four fingers. It isn’t easy but still sounds cool, and just like shape 5, which it is similar to it’s also very useful. 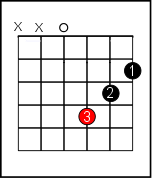 Shape 7 is very similar to shape 6 but a little easier. We only use three fingers of our fretting hand, and instead of playing the D string at the 4th fret with the pinkie, we play it as an open string.

For some, this makes the shape much easier. For others, it just doesn’t sound as good as the above shape 6.

I love chord inversions, but they tend to sound better when picked rather than strummed, so this shape might not be as useful as the others, particularly if you are a big strummer guitarist. 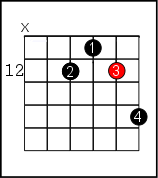 Just like shape 7, shape 8 is chord inversion, although a better sounding one to me. What’s this? You might have noticed we are playing shape 8 right up the fretboard, hence why it is optional.

This shape is a nice jangly higher-up shape, which will suit some picking or some electric noodling with a bit of delay.

It will also sound cool with some Johnny Marr or The Cure type jangly strumming, particularly if you have another guitarist playing the lower version of the chord.

Either way, this is an optional extra and something a bit different to add to your repertoire of playing. This one sounds very cool, especially when jamming with others.

There are of course plenty more ways of playing a B minor chord, but these are the most useful.

The thing is, those songs on the above list aren’t all that hard to play as long you can play one of the versions of B minor, some open chords and change between them.

A while back, when I first started teaching, I had a student who really didn’t want to play a B minor chord. Any time a song would come up with this chord in it, she would say ‘no’ to herself and learn something else instead.

There seemed to be a lot of songs she liked that had the B minor in it too.

I then decided she needed a push and taught her the above ways to play B minor. I made sure she practiced these in the lessons and at home, and in a few weeks, she was playing a them confidently and was no longer afraid of the B minor like it was the Freddie Krueger of chords.

She in fact realised it was more like the BFG – kinda scary, but not really.

Why is the B minor chord so important?

Mainly because B minor features in the key of G Major and the key of D Major, which are two of the most common keys on guitar.

Therefore, you are bound to come across it sooner or later.

Yes, you can use a capo for certain songs to avoid a B minor. For instance, if you are trying to play a song such as ‘I Started a Joke,’ you wouldn’t need a capo if you could play a G, Bm, C, D.

This would then transpose those chord shapes into the correct key to play the song.

That’s all well and nice, but a capo on at the 7th fret makes the guitar sound a bit thin and weedy. Sometimes this works and is fine, but for some songs, it sounds bad.

This is especially the case when you don’t have other instruments around you to ‘fill out’ the bass.

Sometimes you’ll also want or need a lower note than is available with a capo. For example, if the capo is on fret 7, the lowest note now available to you is the 7th fret of the low E string.

If a song had a section that needed a low G note on the 6th string for a riff or melody of some sort, this would be impossible to play.

As I’m sure you can see, there are multiple reasons to expand your chord vocabulary and learn more chords. If you have the basic C, A, G, E, D chords down, then start moving forward and learn the awesome B minor chord as well as all 32 essential chords.

If you haven’t yet got the above chords to a decent standard, don’t worry too much about the B minor – come back to it after you have learnt some simple songs and had some fun on the guitar.

For everyone else, learn the B minor. It’s a lovely sounding chord, and one of my favourite chord changes is from G to B minor.

This sounds beautiful and stands out when I hear it on the radio. So often the G chord goes to a D, C or Em, so hearing that unique but beautiful change to the B minor is music to my ears.

So take the way that is easiest for you as long as you like the sound of it, and learn one of the above songs to start with.

So, now you now how to play a B minor on guitar, if you are new, try them all, stick with one and get learning some songs that use this great chord.

One of the advantages of learning tricky chords is that when you go back to your bog-standard open chords, they will seem easier than before. This is just another great reason to always push your guitar playing to the next level.