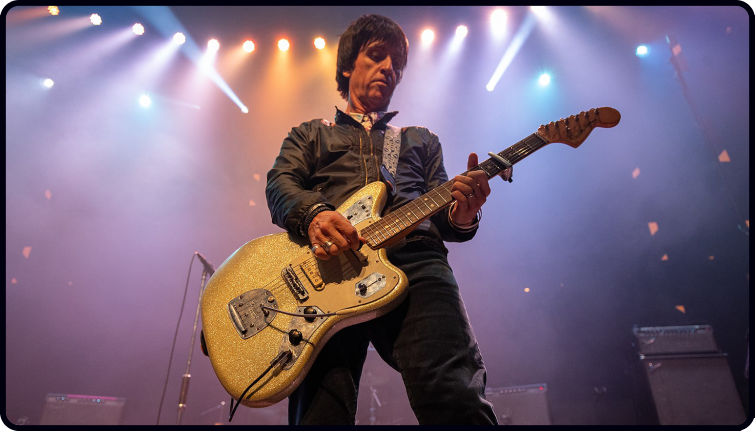 Welcome to the final part of our Killer 3 String Chord Series. So far we have learned 4 variations of 1 killer 3 string chord, learned how to apply rhythm to them, created melodies while playing a chord to create the illusion of two guitars, applied the techniques to a super popular chord progression and learned 8 little ditties using the techniques.

Phew…If you missed Part 1, Part 2, part 3, check those out first as you are best to follow this series in order.

One of the secret but massive benefits to learning Killer 3 string chords is that they act as an amazing gateway between open chords and barre chords. This is a concept we have touched on briefly in the series, but will go into more detail on now.

This has to be one of the greatest reasons to learn and master the 3 triad shapes we have covered so far especially for the guitarist who is no longer a beginner but is not quite ready for the huge leap of intermediate playing.

Open chords are fairly easy, (but unless you want to keep the using the capo for the rest of your life) are quite restrictive. Barre chords on the other hand are awesome. Yes, they are much harder to play but they open up the possibilities on the guitar like nothing else.

If you want true freedom on the fretboard then barre chords are one of the essential ways forward.

These Killer 3 string chords or (triads as the technical name goes) are the perfect way to learn about barre chords and how they are used, but without the hassle and hard work of diving right into them. Instead, once open chords are mastered, learn triads, and once triads are mastered, move onto barre chords.

Going straight from open to barre chords is like trying to leap over the Grand Canyon. Instead, let’s use triads as a bridge. The journey will be so much more fun. That is a path so many guitarists never take.

Look at the diagram for the Major version of shape 1 below. 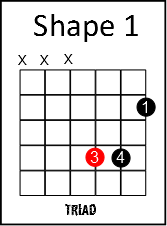 If we were to turn this shape into a full barre chord it would look like this. 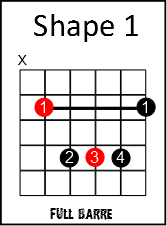 It does become a lot harder to play. Imagine how difficult it would be to play this chord if we didn’t have the killer 3 string version? Also, notice how all the flavour of the chord is still there in the triad version.

So, remember, anytime you are required to play the full barre version, you can use the triad version in its place. 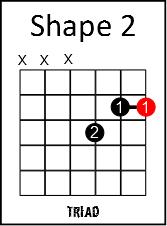 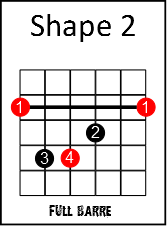 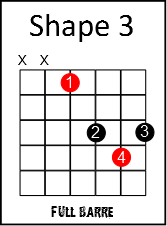 The full version of shape 3 doesn’t really add a lot to the chord. Yes, we get an extra note to beef it up a touch, but for me it’s not really worth the extra effort as we lose the flexibility of being able to switch between the variations of the chord. This is a chord shape where I prefer to stick to the killer 3 string version.

You can turn the triads of the minor, Sus2 and Sus4 chords into full barre versions too using the same principles used in the other parts of the series.

One thing you won’t be able to do as easily with any of the full barre versions instead of the triad versions is seamlessly switch between the Major, minor, Sus2 and Sus4 shapes like we have been doing throughout the series. That’s because some of our other fingers are usually tied up on other strings.

This is why, even though triads make a great transition to full barre chords, you will never stop using them. They will sometimes be the best option. Much more flexible and varied than open chords, and much more versatile and easier to play and transition between than barre chords.

Now, that we have looked at all 3 chord triads and the variations of them (Major, minor Sus2 and sus4) we are going to use them in some examples as some popular artists would. 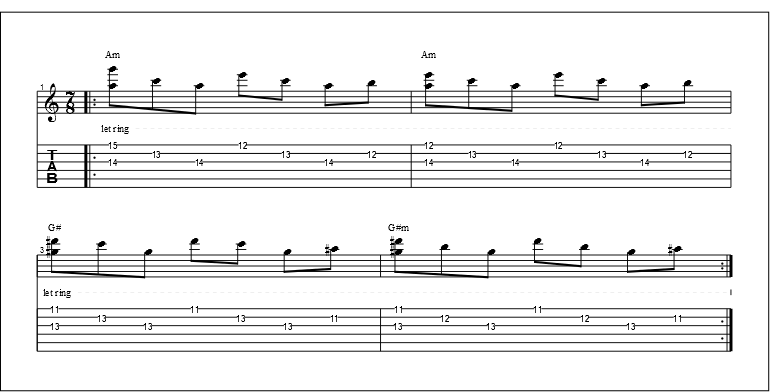 This is a very minor sounding piece in the style of Radiohead with an unusual chord progression and an odd time signature. Hybrid pick the first two notes of each bar using the pick and your 3rd finger or you can otherwise fingerpick the whole piece. 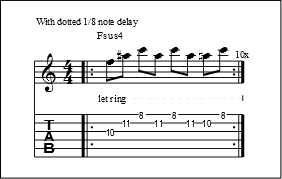 Johnny Marr of The Smiths and Modest Mouse has been the image of this series as he is a master of using triads to create harmonic, melodic and rhythmical guitar parts with astounding and regular brilliance for 30 years now. This example which is loosely influenced by some of his classic The Smiths riffs uses as many of the principles we have described throughout the series but without going ‘over kill’ on the piece.

So, that brings our 4 part series of Killer 3 String Chords to a close. Now it’s up to you apply everything we have learned and have a lot of fun with it.

Every time you hear some high pitched melodic chords in a song, you will now be able to recognise what it is and be able to work out how to play it without fear.

The higher frets on the fretboard should no longer fill you with dread. Now you know you can do so much more than just play the minor scale up there. We have truly bridged a path from beginner guitar to intermediate, between rhythm guitar and lead guitar, and from the low frets to the high frets.

The fretboard is your friend, go forth and conquer it from bottom to top.

Leave a comment and let me know what you think and how you have used the ideas in this massive series for yourself.