Click here to find out how you can learn over 40 fingerpicking songs, 40 strumming songs, over 160 of my absolute best guitar tutorials AND get a free copy of my 5 star fingerpicking book delivered to your door 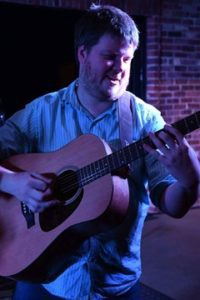 For this month’s Q and A, we have Chicago guitar teacher and performer Eric Justen.

Eric has some real pearls of wisdom to share and some very unique takes on learning and teaching guitar which makes this month’s Q and A really interesting (and not to mention useful) reading.

Although not a superstar guitarist or massive YouTube teacher, Eric is a true performer who has lots of nuggets of wisdom to share with you as well as something controversial to say about Led Zeppelin!

In his own words, he says, “I play and teach full-time in the Chicago area. I’ve been on some big gigs. I own my own teaching studio and fill my schedule with gigs with a lot of groups. Nothing too big. I’m a jobber…but I’ve been doing it for 13 years”.

With a huge range of influences from rock to pop to jazz, and bands and musicians from Van Halen to Jim Croce to Slipknot to The Bealtes, Eric has some eclectic tastes and thoughts on learning guitar.

Read on for more….

Last few years it’s been Kurt Rosenwinkle. There simply is no better modern guitar player out there right now. When I was a kid my favorite player was David Gilmour!

There’s this band called General Zod in Chicago that plays mostly Mahavishunu orchestra covers and is made up of what I consider the best cats in the city. These guys are savages, man. The guitar player slings a Musicman amp with a single dirt pedal and just kills.

I can trust any decent strat to pay my bills and stay in tune all year. I play G&L Legacy’s and I think they are probably the best of the strat family.

You as a Guitarist

Probably Charlie Parker Omni Book solos, not that those are the hardest things out there, just the hardest I’m brave enough to tackle. There’s a really sweet take of Joe Pass doing ‘Just Friends’ on YouTube that I transcribed that I got most of the way through before burning out.

I wanna be in a Tower of Power Tribute that only plays ‘You’re Still a Young Man’.

Your Music and Gear

Big Theater gig in Chicago. Swing musician at a huge show at Bank of America Theater in 2009. I played guitar and mandolin doubles and if enough things went wrong they would suit me up and make me play on a drum-kit on stage in front of 3000 people.

Played the show like 15 times. Playing drums on a moving platform while gorgeous dancers danced around me with some the biggest hitters on the scene here. I should have networked better…

G&L Legacy into a random dirt pedal into a Fender Hot Rod Deluxe. I do a lot of theater gigs and sometimes I’ll build a big board to get a show run done correctly but if I’m playing rock or jazz I usually keep things super simple.

Probably bebop stuff only because I need the practice. I’ll hack through Donna Lee and Cherokee and all those every chance I get just because I can’t play em as well as I should.

Easier Answer – Give it to Me Baby by Rick James

Had to play 20 seconds of surf drums on stage at a huge theater show. I psyched myself out and dragged the tempo about 10 clicks. I watched my musical director in a little screen mounted on my kit get super pissed and count the band steady at the real time while I slogged through and got into tempo. I literally shot over a solid 4 bars of music in front of thousands of people…I was in a cowboy hat no less…

I killed it on ‘walk like a man’ later on in the night and the MD took me out for a beer afterwards and was super cool. Got to play the show a few more times and make a bunch of money. It was dope.

Getting a chance to cut with insanely good players and have them be nice enough to tell you that you did good also!

Who would you most like on backing vocals with you – Dave Grohl, Rihanna, Barry Manilow or Chaz and Dave?

I would guess Barry is probably the best well rounded of all those guys. I’m sure they’d all give a good take but Barry is probably a more resourceful dude to have in any musical situation. I like it when singers can play me what they are gonna sing, ya know.

Original metal/punk/scene/etc: Get your look together and make it easy for me to buy your music directly from you. Give it away for free, but make sure it’s easy for me to give you money DIRECT. Sell me shirts and MP3’s. Put out LOTS of material. Give me 2 albums a year for 3 years.

Jobbing/Theater/ Jazz/ Teaching etc: Know hundreds of songs. Make sure you can read really well. Don’t act like a guitar player at gigs. Don’t tap on 1 and 3. Don’t not know how to swing. Make sure you can play enough piano and drums to fool no musicians. Practice singing. Never be afraid to sing no matter how bad you sound. Transcribe solos.

Transcribe solos by ear, sight read random songs. Memorize chords and lyrics to a Beatles song. Work on scales, chops, drills when I’ve noticed my playing has been slipping.

For the love of god, please learn to read for your instrument.

If you want to make a living, find a way to make money performing by yourself. I’m still working on this advice…

Guitar instruction is fundamentally broken, mostly due to the average guitar player’s lack of reading ability. Our deficits in general musical knowledge produce holes in our playing that is filled by Internet gurus and tab sites. Get your fundamental reading chops together.

Learn how music works. It will help you sift through all the BS on the web and save you a lot of time in the long run, especially if you wanna get paid enough money with your guitar to not have your girlfriend leave you.

Most useful bit of advice you have learned from teaching?

Different people want different things from music lessons. What someone wants is not always what YOU think they NEED. You’re probably right, but even if you are…there comes a time when you just have to be honest with your students about what kind of work it takes to play at a certain level and let them decide how much of themselves they want to put in it without you judging them for it.

Most useful bit of advice you have learned from performing?

Don’t shred a bajillion tasty licks at the end of ballads, man, especially on a theater gig. No one wants to hear that crap.

Festival you would most to play?

Body Count, man. Ernie C shreds house and he dominates on that record and I don’t understand why more people aren’t talking about it.

If you want to check out Eric’s blog on all things guitar, check out his website at Guitar Smart Studio.