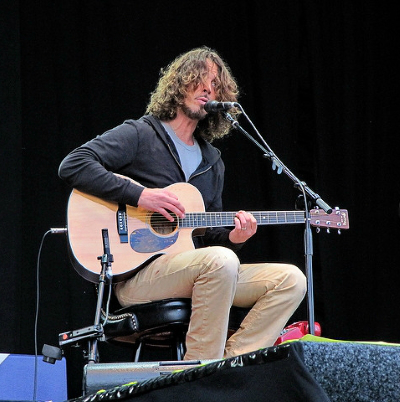 This is an intensely personal post. Just last week the music world and world, in general, lost an amazingly talented man.

Chris Cornell was the soaring voice who was the soundtrack to the last half of my life.He had a voice that could break down a brick wall, or pull on your heart strings and often he could do it in the same line.He is one of a handful of guys who inspired me to become a musician and help set me down the path of where I am today.

If I didn`t discover his music I might well have chosen a different career other than that of playing and teaching guitar.I don`t want this to be a gloomy post or anything full of conspiracy theories (although there is a curious one) but I want it to be inspiring and I also want to share with you what is one of the greatest cover songs ever and give you some tips and the chords to play it.

He was voted the 9th best singer of all time by Rolling Stone magazine he was that highly regarded.

The day the world lost one of its great musicians

On Thursday morning of last week, I got a text from my partner Sarah asking me if I had heard the news about Chris Cornell and if I was okay?

I instantly knew what that meant.

I felt pretty crushed as I am sure many of you did.

When other great musicians have died, I have felt a few moments of sadness but not much more than that.

Over the last few years, some amazing talents left us in a variety of ways. People such as:

…and many more all died.

They were all loved by many – I included.

When they died though, part of me found it strange how much emotion people felt for people they never knew.

I didn’t really get it but as Sarah tells me I’m not overly emotional. I’m just a pretty happy guy who gets on with things.

I had tears when I heard the news. Some of you might find that strange.

I think we only get so many heroes in life and most of those are people we know in our circle of family and friends and occasionally someone we don`t know.

Chris Cornell was one of those for me.

I lived and breathed his music for so long

I am surrounded by his music on a daily basis still.

I`m either teaching some of his acoustic songs (the infamous covers and originals) as well as his big rock numbers, or I`m playing some of those songs myself, listening to them in the car or just singing bits and pieces myself.

I have also covered quite a few of his songs in various bands I have been in too and only a few weeks ago filmed a tutorial for his song `Hunger Strike` which is going to be part of the updated Fingerpicking Classics course (along with some other awesome tunes) for all new and current members.

I felt his music and his lyrics very deeply. His voice, lyrics and songs were special and even though I never met him apart from a quick hello after an Audioslave gig in Wolverhampton he was by all accounts a lovely, warm and humble guy.

Not just a great singer

You hear stories about your heroes and sometimes they disappoint. Not with Chris though. He didn`t try to act rock `n` roll.

I heard a story about some guy calling some other guy a `queer` in an airport in San Francisco and he went over and put the guy in his place while others let it happen.

Mike McCready of Pearl Jam says he owes a lot to Chris for giving him his break on the Temple of the Dog record and Sir Elton John knew him and described him as “the loveliest man”.

I’ve been a music lover and guitarist since I was 15 and quite a few of my favourite musicians have died but Chris Cornell, I thought would be here forever.

He was always active – especially the last few years releasing the last Soundgarden record, `King Animal` and his latest solo album `Higher Truth`. Both classics and both very different.

He even just released a beautiful song called `The Promise`.

I actually just assumed without really thinking much about it that he would be here till he was 90 something still releasing great music but obviously I was wrong.

A better guitarist than people realise

As a singer, he was and will always be known as one of the greats but as a guitarist, he was pretty underrated.

He wrote loads of great riffs and had a lovely feel – especially prevalent when playing acoustic guitar.

He was a guitarist who always played for the song and didn`t want to show off – he would let the song do the work.

His subtle sophistication on an acoustic, usually a Martin D-28 Marquis (amongst many others), is something all guitarists can listen to and be inspired by.

He was a tight player who would use a lot of dynamics and strum with an artistic simplicity that just oozed class.

If you want to improve your acoustic playing, to either accompany yourself on vocals or others, then his `Songbook` album is a great place to start as it features originals as well as covers such as `Thank You` by Led Zeppelin and `Imagine` by John Lennon.

It really is a masterclass of tight, punchy, powerful singer-songwriter guitar playing and singing.

Instead of me going on anymore, the point of this post was to try to find something good from it all.

I hope Chris` death is not in vain and if the prescription drugs did indeed influence his suicide (as the theory goes), then I hope the drug companies who run riot with people’s health are made accountable and this awful tragedy doesn`t happen again.

I also hope that people who suffer from mental health issues (as people who are close to me have done) are given the confidence to get the help they need and the help is there when needed.

Also, since Chris died I have sat down and written a couple of songs which is something I haven’t done for some time.

Lately, I’ve been so busy with the release of my recent blues book and doing other cool stuff such as blog posts and lessons for you guys that I have neglected my songwriting and to a lesser degree my guitar playing.

I guess the point of this post is – if you’re feeling pain like Chris must have done, don’t fight it alone, you’re never truly alone.

Also, it`s good to remember – be inspired by your heroes wherever they are.

Let them inspire you to create and play the music you have in your heart.

The most beautiful cover ever?

Here is one of the most beautiful cover versions I have ever heard.

It is a cover of the Prince song `Nothing Compares 2 You` which was a massive hit here in the UK in the 90`s by the Irish bald-top, Sinead O`Connor (whose version was also great).

The song is pretty simple to play – apart from the Bb but it is wonderfully arranged and played. It also features some lovely cello work and beautiful lead playing by Keaton Simons.

Watch the video and look out for the little hammer-ons and pull-offs Chris effortlessly throws in throughout.

All in all, it is a masterful song and an amazing cover. I`m not sure if anyone can not be touched by this version.

If you have never heard Chris Cornell`s music,  I`d give it a listen now, and let his music and his awesome voice inspire you to become a better musician.

“No one sings you like you anymore” – Black Hole Sun