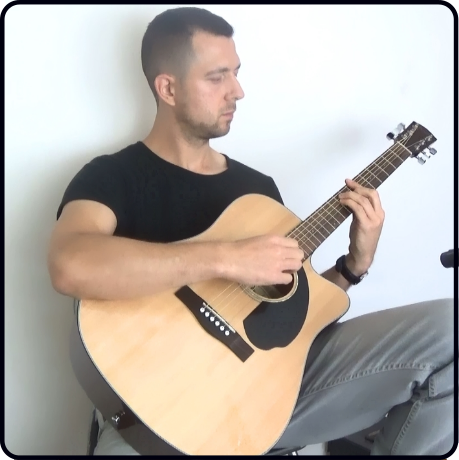 For a while now I have thought about buying a new guitar. In this post, I’ll explain my process and share with you some tips that I used to save a massive amount of time and money while getting a great guitar for me.

My trusty old Cort electro-acoustic that you will see in most of my YouTube videos, has taken a battering over the years and is now sadly out of service. I, therefore, needed to get a new one and quickly, without fuss and without spending too much.

First of all, I decided 100% against buying online.

Buying online can work in some cases but whenever a student asks for my advice I’ll always say go and try out at least 10 guitars in person. Of course, I practice what I preach.

I, therefore, freed up a few hours in my diary and headed down to a guitar shop called Guitar Guitar. This is a pretty big guitar chain in the UK and the one in Birmingham has the biggest acoustic collection anywhere in the UK (so they say).  They actually have the whole building full of acoustics; the electrics are based in another building next door.

I literally tried 12 electro-acoustics (most other shops I have been to don’t have 12 in the whole building) and after about 90 minutes found the one I wanted.

I was determined to get one on this day as my time is very limited. It actually felt like I was on a mission.

I told the chap what I wanted and he sat me down in a booth where I could play without interruption or anyone listening. I quite like an audience but trying out guitars is a personal private experience so this booth was very handy.

I’ll take you through some of the guitar brands I tried, the rough prices and exactly what I thought of them.

The guitars I tried…

Here’s a rundown of the guitars I tried. The first one I tried was a Sigma (£445). It sounded freakin’ awesome but it was horrible for me to play. The neck was really wide and even for me who is a very experienced guitarist barre chords were a challenge, particularly the E minor shape.

Don’t get me wrong, I could play them fine but the precision I needed was too much. I want a guitar that is effortless AND sounds great. This didn’t fit the bill. (Talking of barre chords, I have a big announcement soon by the way, so excited!)

Next up were two Fenders, one was priced at £269 and sounded and felt great and the other was £299 and sounded as good but didn’t play as nice. I made a mental note of the first one.

After this, I tried a Yamaha FSX315 which was wonderful and sounded great.

Aware of time, I quickly went through and dismissed a Takamine GN10CE (£310), another Sigma (£379), a second hand Tanglewood (£205), a second hand Yamaha (£190) but none of them I liked. In fact, the Takamine was awful to play. This was a big disappointment as Takamine are revered as being great. None of them felt as good as the Fender and Yamaha.

A decision to make…

After trying the ones I liked again but this time amplified it was clear to me it was between the Taylor, the first Fender, and the Freshman.

After a bit of deliberation, I realized I was enjoying the Fender far more than the other two. Something about it just clicked with me. The Taylor sounded and felt great but was a touch too thin when unplugged and didn’t feel as good as the Fender. The Freshman felt awesome, (sometimes cheaper guitars are nicer to play than more expensive ones – just the way it is) but it wasn’t a solid top and didn’t have the richness of the other two.

I decided it was clear – the Fender CD-60SCE was the winner.

This was the guitar that felt the most comfortable and enjoyable to play, was one of the best sounding both unplugged and amplified, with the wide variety of pieces I tested on it (more on this in a minute) and inspired me to jam more than any other.

It quite quickly felt a part of me – like it was helping my musical liberation and not hindering it.

How I haggled £65 off with one sentence…

Priced at £269 I decided it was worth a little haggling. I told the guy that I was thinking of coming back (I didn’t want to have to but it was true as this guitar was cheaper elsewhere and I was running very low on time, had to pick my son up from childcare), and obviously, he was disappointed to not make the sale.

Then, as I was leaving said, “you know what, let’s do it, what deal can you give me on the Fender?”

He could sense, I was in a real rush, cut to the chase and did a Google search and found that Andertons (another UK shop) were selling it for £205. He said he would match them. In my head, I was thinking “wow, great deal”, but didn’t show it.

I asked him to throw in a tuner and I’d get it, but he said he couldn’t. I already knew I got a great deal but it’s always worth a try. Instead, I got him to throw in two cool picks and bought a new stand.

Overall, I spent £218, got a great guitar, a new stand and two very cool picks.

Not bad, for a simple “haggle”. Really, it wasn’t even haggling but one sentence I spoke saved me £65 and I got a guitar that I love.

Why shops are better than online

If I was looking online I probably, (almost certainly) would have overlooked this guitar. There are so many to choose from and brand bias usually influences us. Over the years I really have learned that brands don’t usually mean anything when it comes to finding a guitar that suits you.

That is the point, some people may hate the Fender but love something else like the Sigma (lots of people do rave about Sigma) and it literally is a case of “each to their own”. Everyone’s hands, fingers, and ears react differently to every guitar.

The next time you think about buying a new guitar, I urge you to try at least 10 in real life, don’t worry about the brand name, and just go and play.

I had a budget of up to £600 but found nothing as good as the Fender in that price range.

If I had to buy online I’d probably have gone for the Taylor and not been as pleased (as well as spent more). I would also have had to do lots of research if I bought online too whereas in real life you learn more in a minute of playing the guitar than you would if you read reviews for an hour or so.

My little haggle also shows that you can, in real life get the guitar for the price that you would pay online, so the argument that it’s cheaper online doesn’t always hold true.

How I tested the guitars

In terms of what you play on the guitar, it’s important you try out a load of pieces all with a wide variety. On every one of these guitars, I tried out parts of the following pieces:

As you can see there was a massive variety of pieces I tried which cover pretty much all I need to cover in a wide variety of styles. Most of the above pieces are all taught in my membership programme but any similar variety of pieces will be great for testing.

Combined all of the above cover fingerpicking, strumming, lead, riffs,  playing higher up and lower down, slow pieces, fast pieces and more. When you go and try out a load of guitars, do the same sort of thing. If you are a beginner and only have a few songs try those and if you know 10 or so songs try those.

I call this my testing repertoire and thought about it before I went in. I didn’t just turn up, strum a few Oasis songs, pick the best sounding guitar and bought it home only to realize it is awful to fingerpick. I planned ahead.

It’s so important to get a guitar that suits YOU

Most of the guitarists actually buy or learn on guitars that are horribly unsuitable for them but for some reason, mostly lack of awareness, they take years to change them if they ever do. A good guitar that suits you helps you to learn faster.

For me, I wanted to find the best acoustic electric guitar for the money and got it. You can do the same for whatever guitar you want.

You can literally spend thousands on a guitar that suits someone else perfectly but doesn’t suit you at all, and you can spend hundreds on a poor guitar or one that you love. Decide on your budget, save up if you need to and buy the best one for you in your budget whether that is at the top end or the bottom end of your budget.

My advice for every guitarist out there who thinks their guitar may be holding them back even a little is, set out a budget, try out at least 10 guitars in this budget (you can save a little money here and there and/or part exchange your old one), play a testing repertoire of pieces, whittle them down to a few, try them again (plugged in if electro-acoustic), and then buy the best one.

This is something most guitarists only dream about and never get round to doing.