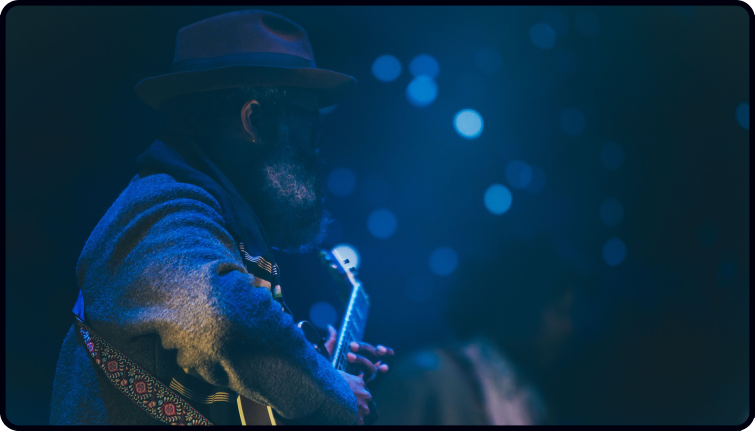 Following on from last week’s post about Tommy Emmanuel, which a lot of you said you enjoyed, I wanted to give you some insight into the mindset of the guy.

On the surface, it might appear to be advice for those advanced players who can do loads of cool things on the guitar.

In reality though, this little tip is immensely powerful.

One of the things he says is that no matter how good you get, guitar playing is music and music is storytelling.

In his own words, he says:

“I play and something happens to you! Wow, what a concept. So, the better I get at it, the better I’m in tune with what I know touches people.

And so, I try to think in that way: if it really moves me, I think it’s going to move you, and if I get it, I think you’ll get it. Because I’m a real simple guy: I wanna hear the melody, I wanna be told a story, I wanna be taken somewhere.”

That’s so true – that’s what we all want when playing or listening to someone else play.

The ultimate aim for any musician is to be able to take the listener on a journey.

I know most of you play for yourself and aren’t bothered about playing for others, and that is great.

Either way, think of your guitar playing each day as a chance to share your own wonderful adventure with someone else or to go on a journey yourself.

Want to travel to Narnia? Be Gandalf casting spells over Mordor…

…Or do you want to be a secret agent like James Bond,

…Even an astronaut discovering new worlds, or an adventurer setting foot on new soil for the first time.

This concept might all seem a bit wild but remember this…

…guitar playing is music, and a big part of music is escapism.

I regularly love to have a few moments to just jam and create a random little story with my guitar.

To do this, I tend to imagine a film I’ve been watching or a book I’ve been reading and try to create my own little mini soundtrack to it.

By just playing a little melody created from chords, scales, or sometimes, just random notes up and down one string.

I then ask, does it fit the style of the story?

Can you pick up the guitar and create some mystical sounds for a sci-fi story?

What about cheery galloping heroic fanfare for the soundtrack of a hero saving the day?

…Or something deep and emotional like two old lovers being reunited after years apart?

I rarely hear others talk about this power, but just writing this email is getting me excited to pick up the guitar and jam.

I hope it does for you too.

I’m not saying this is for everyone, but for those who love cinema and stories, it’s a fun exercise.

What books, films or T.V. series have you been watching lately?

Try creating your own little soundtrack for it.

If you are a beginner, or rarely do much creative playing, this might seem hard and it will be at first.

The key is just playing notes and seeing what happens.

The beauty is, each time you do it, you will learn just that bit more about guitar playing, the fretboard, and music in general.

Also, remember being creative is actually good for brain health.

Lots of reasons to have fun with this idea.

For this sort of thing, where you are just being creative and experimenting, you don’t have to know any theory, songs, scales, techniques or much at all, but it certainly helps!

If you want help with these areas and ways to get creative, check out the Supercharger lessons in the Elite Guitarist Inner Circle.