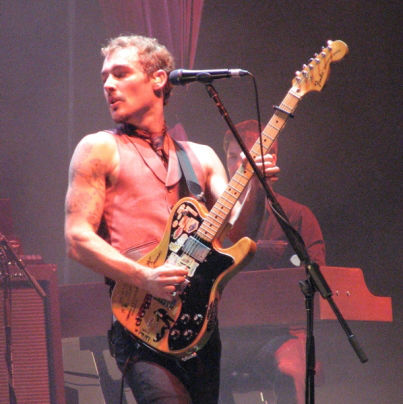 Every now and then I will write a song, a riff or a melody that I like, play it through a few times, and then nod my head in approval, and say to myself:

“Yeah, man, that’s the sh*t” while pouting like a rock star, only to realize with horror that this little ‘masterpiece’ I wrote sounds just like another song!

Back when I was about 17 I wrote what I thought was a killer riff, only to realize that it sounded very much like Daniel John’s (from the band Silverchair as seen in the image above) riff for the song Anthem for the Year 2000.

I think a little piece of my rock’n’roll soul dies every time this happens, but thankfully it gets reborn pretty quickly, as I will often just take a deep breath and realize there is a solution.

I’ll either throw the song out totally or adapt it little by little until it sounds completely original and just like my own.

If you want to adapt the piece in question try the method I will describe in a minute – the method that is especially useful for when you feel like writing something but you have run out of ideas.

It’s a method I call ‘Chinese Whispers’ and it can be a fun way of writing music or turning that piece that you accidentally ‘stole’ into a whole new beast entirely.

Errors would often occur leading to a completely different  (and often funny) phrase by the time the message reached it designated person.

We can use the ideas behind that game and use it for writing a great song or piece of music.

Songwriting 101: How To Write A Song Using ‘Chinese Whispers’

Here is a quick video of me taking a song such as ‘Knockin On Heaven’s Door’ by Bob Dylan and making it sound totally original.

These are some of the variables you can change.

A combination of one or two of the above will give you the best results.

The more of the above variables you change, the more unique the song will sound but the less like the original it will sound.

Your new piece may well be and often is even better than what you started out with.

Just ensure by the time you have finished it, the piece doesn’t sound anything like what you started with.

It’s a lot of fun, can help you during those times when you have written something that sounds like another song and you can use this method any time you are feeling a bit of writers block.

Adjusting two or more of the above variables will often yield very cool and very original results.

Twist and mould it so it sounds purely like something from you, and just you.

Go on grab your guitar today and try to write your own song. Everyone should write at least one song in their life and get it recorded.

Watch the video above to see my method in action.