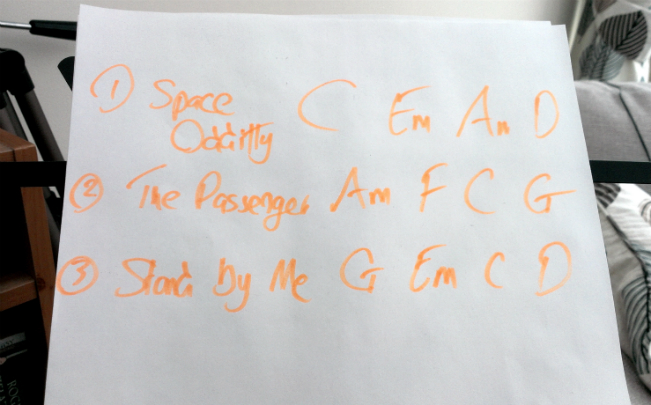 Every guitarist should learn at least 10 famous chord progressions and know them inside out.

The main reason is, doing so will save you a lot of time and make you a better guitarist in the long run.

For those of you not sure, a chord progression is basically a bunch of chords played in a certain order.

The chords for the verse are C, Em, Am, D. (The C and Em go back and forth before the Am and D come in).

Now, let’s take Iggy Pop’s classic song ‘The Passenger’. The chord progression for this one is Am, F, C, G. (On the second time round the G is replaced with an E which is unusual.)

Let’s compare them side by side.

One of my students named Josh asked me the other day to teach him the song ‘Indian Summer’ by the band Stereophonics.

Therefore I was quickly able to show him how to play it. He was surprised by how easy I made it look.

A Powerful Trick That Will Save Lots Of Time

It’s not some sixth sense or superpower I possess. If anything, it’s more of a trick – albeit a very useful one.

I was able to do this simply because I trained myself to recognise chord progressions by listening to them and therefore it only took a few seconds to hear it and work it out.

I wouldn’t of been able to do this years ago. Years ago, when working a song out for myself I would have messed about with lots of random chords until I eventually stumbled across the correct sequence.

Either that, or worse, I would have looked up the chords on the internet.

I eventually had a brainwave however. Quite a few years ago, I thought to myself:

“Why don’t I actually start tracking the chord progressions for different songs? Surely, it will make learning new songs easier”.

So I did. No book I ever read or video I ever watched explained any of this or the uses doing so possesses so I had to work it out for myself.

Every time I learnt a new song, I would now go into my Evernote note and write the song down and the chord progression alongside it.

At first I just put the chords alongside the song name and artist and then eventually I started using the  Roman Numeral system but this isn’t necessary. (The Roman Numeral system can be complex at first but once understood is a very useful too. I’ll explain this in a future post).

I started to see a lot of patterns between songs. For instance, there are a lot of songs that use the exact same chords progressions, and you know what, they don’t sound much like each other.

Yes, there are a lot of songs that sound like rip offs of other songs, but that’s usually where the artists has stolen a vocal melody or riff.

For example, I got that Am, F, C, G sound drilled into my head as I must of learnt and taught at least 10 other songs that use it.

Like I said with the Stereophonics track, it made learning it a piece of cake.

Here is my guide on how to analyse and keep track of all the chord progressions you know.

Ideally you will want a list of about 10 really common chord progressions that you know inside out.

How to track your most used chord progressions

Some simple pop songs will have a simple structure and use the exact same chord progression throughout the whole song.

Quite a few modern songs do this too.

Start Off With Simpler Songs

The more ‘out there’ the music is, the more unusual the chord progression will be.

There are of course exceptions to this rule. Most people think The Beatles only wrote simple pop songs.

Yes, of course they did. Take ‘Love Me Do’ as an example.

It is very simple in structure and its chord progression.

Then, look at ‘Blackbird’. If you try to write down all the chords in the verse for this one, it would take a bit longer and look far more unique than the chord progression for ‘Love me do’ (but that’s why The Beatles were geniuses).

Remember to track the chord progressions for ALL the songs you know and then look to try to spot the similarities between songs, just like I did with The Passenger and Indian Summer.

Then listen to the songs and get the sound of the chord progression ingrained in your ear.

Yes, you might write the chords for the odd song that is so unique you won’t ever hear it again, just like ‘Blackbird’ but 90% of the songs you will hear on mainstream radio from the 50’s to the present day will have very familiar chord progressions that you need to be able to recognise quickly.

You will ideally have 10 chord progressions that you will instantly be able to recognise.

It will take a little time the first time you do it if you know more than 10 songs but after that just make sure every time you learn a new song you add it to the list.

I recommend giving these chord progressions silly nicknames based on its own unique flavour.

Doing so will help you recognise them quickly and therefore when you hear a song that uses one, you will be able to play it quickly and accurately.

There will be no need for you to go on YouTube or find out the chords on Ultimate Guitar.

Your ear will be well trained and your knowledge of music as a whole will increase.

All this will free up more of your time to spend on improving your guitar playing in other ways.

I talk all the time to my students about looking for patterns. It’s one of the best things a musician can do and a huge time saver.

You can look for patterns on the fretboard and where notes are located and this is super useful. You can also look for patterns in regards to strumming patterns which is great and very critical. (I cover this in detail in my course Strumming With Soul). There are lots of ways that guitarist look for patterns but not many do so in regard to chord progressions and this hampers their playing.

Don’t be one of those guitarists.

It takes a few seconds to note down the chord progression of a song but doing so will save you months potentially in the long run.

Following the above guide is not only massively useful for working other peoples songs out, but is a great tool for composing or songwriting.

Don’t forget each chord progression has its own mood or flavour.

When you want to write a song you can think of what mood or flavour you are after and then go into your list of chord progressions and use the appropriate one. Simple but highly effective.

Don’t forget the aural skills you will gain from doing this are massive too.

Leave a comment with any thoughts on this post and especially if you know two songs (or more) that share the same chord progression. I’ll love to hear your thoughts.