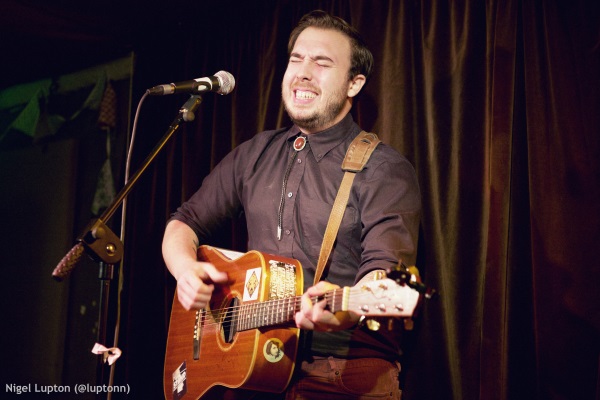 Since signing to Wild Sound Recordings in 2013, Harry Harris has been building a reputation as one of the UK’s most original and formidable singer/songwriters.

A ruthless guitar player with a voice that moves from the explosive to the intimate, he writes songs that grab you by the scruff of the neck and refuse to let go, with influences ranging from the great American songwriter Warren Zevon to bar-rock band The Hold Steady to Scottish folk singer Karine Polwart.

The Telegraph even gave Harry a five star rating for his last album ‘Songs About Other People’ and quite rightly too.

Harry’s music is something I’m a big fan of and his acoustic, emotive music makes him the perfect choice for our first of many monthly Q and A’s…

I love Blake Sennett, from Rilo Kiley, for his tone and his lead playing, and I love Lianne La Havas for her dexterity and inventiveness.

August And Everything After by Counting Crows, the first album I ever really fell in love with and one that’s stuck with me ever since.

Maybe something up beat by Van Morrison? Cleaning Windows, Domino, something like that should knock me out of whatever funk I happen to be in.

Hard to beat May You Never by John Martyn, purely because I have no idea how he manages to play it as percussively as he does. I know exceptional guitarist who still can’t get close to how he performs that song, it’s mesmerising.

I’ve got a thing for Telecasters, but also I recently bought a Hagstrom Viking which I’m having a really great time with at the moment, so I’m gonna go with that.

I wouldn’t say anything I play is particularly difficult. Jackson 5’s I Want You Back has some cool chords in it, and Bees Wing by Richard Thompson is kinda intricate I suppose, but nothing terribly taxing. I get shown up by other guitarists a lot.

I’m fairly certain the first song I ever learned to play was Bad Moon Rising by Creedence Clearwater Revival.

I played mandolin for a few years but wanted something with a bit more texture for songwriting, so picked up one of the old guitars we had around the house. Over time the priorities shifted, and guitar became my primary instrument.

Self taught on the guitar, but I had mandolin lessons, so knew about chord structures and scales and whatnot.

I use DADGAD and Open D a lot, and then CGDGAD which is a nice one. Open G a lot, CGCGCD too, which is great for folk and fingerstyle playing.

I used to have a few songs in C#AEEAE but they didn’t stand the test of time, it’s a lovely tuning though.

If I haven’t covered it it’s probably because I can’t! I love old swing songs and would love to do those justice, but the arrangements are too complex for me to play solo, so they’ll have to wait until I get my big band.

My album launch at Green Note in January 2015. I had a bit of a band with me, sold out the venue for the first time, and got to pick my own supports. That was a really special night.

Very minimal…like, nothing really. I expect I’ll end up getting a few pedals for my Hagstrom.

Kandinsky Was A Synaesthete is always fun, that’s from my last record.

I’ve nearly fallen down a few times, I tend to lose my balance a bit, but thankfully nothing too bad.

Anytime people sing along is good. Anytime you have a really good show it feels like a privilege. Touring Ireland with my friend Anna McIvor last year was a highlight.

Everywhere really, stories I’ve heard, history, other songs. I keep a notebook and jot down things here and there and sometimes they form a whole.

Who would you most like on backing vocals with you? Dave Grohl, Rihanna, Barry Manilow or Chaz and Dave?

Top advice for any new bands/artists trying to ‘make it’?

Don’t rush it, only listen to people who you really trust, don’t force the issue, and if you stop enjoying it, then stop.

Nothing too formal, I usually pick up my guitar and noodle around a bit, maybe run through some of my old songs or some covers.

Train your left thumb to play bass notes and you can basically avoid ever playing full bar chords.

Start on a nylon string because it’ll hurt less.

Focus on your right hand more and try not to move your entire arm when you’re strumming. Work from the wrist.

I remember thinking my hands weren’t big enough at first, but then it just kinda clicks into place and the muscle memory builds up. Cover as many songs as you can, from different styles, because that’s how you learn about melody and chord structure.

Home Farm Festival, which I’ve played the last two years with some other great musicians. An amazing weekend.

Festival you would most to play?

Maybe Bonaroo in the States.

Ohhhh I don’t know, I never got into Radiohead, so I’ll say Radiohead.

Maybe Counting Crows again? They sell a lot of albums but none of their records, bar their first, has got universal critical acclaim, and their latest ones don’t get covered a lot at all.

But they’ve been going for over twenty years now, and are an exceptional live band, and their new stuff is incredible. They’re peerless.

If you want to check out Harry’s music you can do so on Spotify or his website.