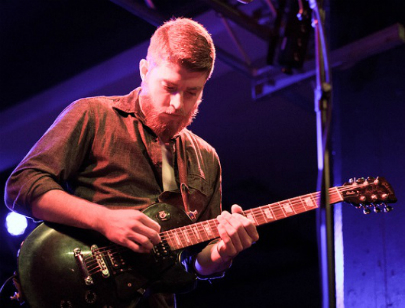 Kentucky Knife Fight playing at Plush on August 4, 2012 for their Misshapen Love 7″ release. by Abby Gillardi, licensed under (CC BY-SA 2.0)

I recently had a big debate over at Reddit with a fellow guitarist. This debate could have been infuriating but it actually was quite useful as it highlighted a certain flaw that experienced guitarists have when sharing their knowledge with less experienced players.

If you are learning to play guitar or you still consider yourself to be a beginner, you’ll find this post very handy – especially if you learn from others, either in person or online.

Before I get into this flaw in detail I’ll share the incident as it happened.

A few weeks ago, I shared my post of 8 ways to play the B minor chord. It received a lot of up-votes (a Reddit user’s way of giving it the thumbs up) and some positive comments.

There was one user however, who could only bring himself to say negative things about the post.

At first, I thought, “What the hell, is this guy smoking something, or is he a troll?”

This guy, though I couldn’t ignore, as he was blatantly sharing bad advice with the Reddit community.

Any inexperienced guitarist could have read what he had to say and taken it as gospel which would only make their journey of learning the guitar harder than it has to be.

So what was it that he said that was so silly?

Well, if you refer to the 8 ways to play the B minor chord post I made, I discuss a variety of options as to how you can play this one difficult chord.

This is a logical, progressive way of teaching the guitar that has worked with hundreds of online and offline students – long-time readers know and appreciate this.

This guy, however, said things along the lines of:

“I would teach them drills they can do to be able to play that Bm (referring to one of the hardest ways). With the right drills and a bit of practice, they will be able to do it in short order. If not, then guitar is not for them and they will quit anyway.”

Geez, this guy is pig-headed. At this point, it was clear to me he has been playing for a long time and has totally forgotten what it is like for a beginner guitarist to play and learn the difficult things he just takes for granted.

More from this guy:

“I have been playing a long time, and I am very skilled, and I got that way from practicing and practicing all the things that were difficult.”

It’s clear from this guy’s stubborn tone that he had a hard time learning to play guitar and did things the difficult way.

This all brings me to the point of this post. People who have played for a long time often want you to succeed but often they think the only way you can do it, is the way they did it.

Sometimes other guitarists actually don’t want your guitar playing journey to be any easier for you than it was for them.

In other words, if they struggled to learn, they’ll often hate (deep down anyway) it if you find it easy or appear to find it easy.

Even if they have your best intentions at heart, which most guitarists do, they may give you advice that is just plain, bad advice.

Learning to play guitar – their way or the highway

I call this the ‘Big Brother theory’, as big brothers nearly always think they are correct and their little brother or sisters must learn exactly as they tell them.

Many students tell me their big brother or pal told them that there is only one way to do something and “every other way is wrong”.

If you disagree, sometimes their ego can take over, and they’ll often be upset with you or not want to jam with you anymore.

The thing is, you must be careful when learning from seasoned players.

Guitarists who learned to play over 10 years ago didn’t have anything like the tools we have available to us these days.

Back even when I starting learning to play guitar 16 years ago, there was no YouTube about, no online blogs, no Guitar Pro or anything like the amount of tools available to us these days.

If any of those were about they were in a primitive form and you needed the internet to make the most of them which I and many others didn’t have back then.

Rewind to the 90’s and all the way back to the 60’s, 70’s and 80’s, the only way you could really learn guitar was by affording a teacher (not many guitarists could) or lots and lots of trial and error listening to recordings which meant time and effort.

Can you see why these seasoned guys cling on to doing things the harder way?

Most of it is because that is how they learnt and that’s all they know, and because that worked for them, it means it is the only way for you.

They wear these struggles like a badge of honour and want you to do so too – to toughen you up, so to speak.

The main thing to take from this post is the fact, you must be aware of learning from more experienced players.

Some will be like the Sergeant from Full Metal Jacket, screaming ” C’mon Private Pyle” while you struggle to get rid of the buzz when learning a C Major chord and some will be more gentle.

No matter who you learn from, and most experienced guitarists (younger and older ones) are good people who want you to succeed, don’t be afraid to ask the question to yourself or them:

“Is there an easier way to do this?”

Lots of you jam with others regularly and many email me and my private students telling me things such as:

“To play this song, you can only use this guitar with this amp with this tone setting”

“You shouldn’t use a capo to play this song”

“You don’t need a capo to play guitar, capos are for cheats”

Most of the time these statements are wrong and will make things harder. The fact is, the guitar is a wonderful instrument with many different ways to do any one thing on it.

I’m not saying don’t jam with others, far from it, you should learn off lots of people, you should jam regularly, and you should learn from many sources – just take what they say as fact with a pinch of salt and use your own judgement as much as you can.

If you are unsure if what they are saying is accurate or not, ask someone else.

If you do so and ask questions, you’ll see how some people’s false beliefs will be destroyed when you get a balanced view.

As you know, I’m totally against making things harder.

The guitar is a tough instrument to learn, but there are ways to make it easier and more fun without hindering you in the long run.

That is my philosophy. I hope it is yours too.