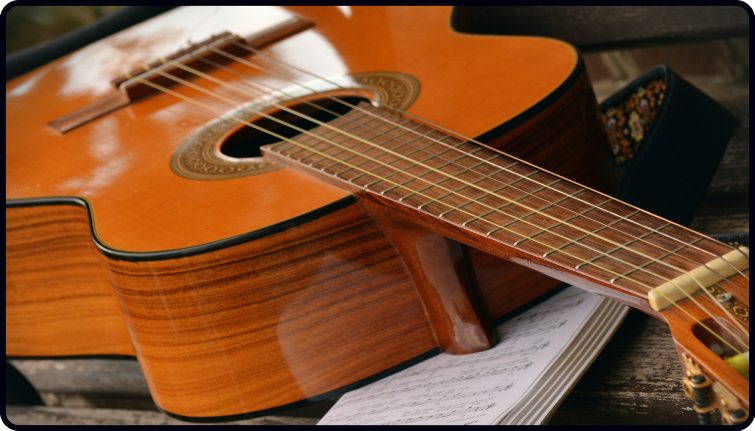 Here is another one of the ‘beginning of the week’ posts with 3 of my thoughts on guitar, music, and life, including tips on learning guitar.

Look at what 99% of people are doing and do the opposite.

The idea is that you should follow the 1% of people who are successful and not follow the herd.

I totally relate to this with the guitar.

Many of those out there in “Guitarland” are frustrated and find playing tough.

Not everyone is in this situation though, and I had a good email the other day from a student.

This is what he said in relation to a small part of my book, Fingerstyle 101…

“Light touch, fingers near fret, no calluses…things I do that other guitarists question!

They always ask why I have no calluses…now I know!”

These others are obviously unenlightened and think like 99% of people out there.

That is that sore fingers, painful playing, and crusty bleeding calluses (grim description I know) are the price to pay when learning guitar.

This chap knows it and I hope you do too.

I have recently been browsing through a book I bought years ago. It is called Talent is Overrated and it is a book I highly recommend (I’ll share some key points from the book in future emails, as there are many great ones).

One of the examples the author uses in the book is stand-up comedians.

They assume he has this natural God-given ability to walk on stage in front of thousands and make every person howl with laughter at the drop of a hat.

The author points out though, that comedians like Chris Rock work for months in advance for a new show.

They do dozens of small stage warm-up gigs in towns they would rather not be in on cold damp nights, where they…

Test out tonnes of new material – some of which barely gets a chuckle from the audience.

These comedians then cull the bad stuff and refine the good stuff ready for the big tour.

I heard similar things about other comedians in the past such as Jerry Seinfeld, Rodney Dangerfield, (and another one of my all-time favourites Bill Bailey).

The bottom line is this – all those we see who make it look easy, work mighty hard in the background at getting where they want to be.

The same goes for guitar playing.

Most of you don’t want to be superstars, so obviously these immense amounts of effort are not necessary, but to get good at anything takes time and patience.

Have that and the rewards will come.

The new Fingerstyle 101 Facebook group I mentioned last week has been building up nicely.

It now has over 130 members (and more joining each day) which is great.

Nail care, thumb picks, some bad Halloween guitar puns from me, and…

A student posting a video of him playing an example from the book (and doing a great job too).

The group is open to anyone who has bought Fingerstyle 101.

Then join the group for free at the link below.

Also, if you are one of the first 200 to join, you will be entered to win a very cool prize, so join today.

Anyway, I hope you found these tips on learning guitar useful, and you have a great Tuesday!