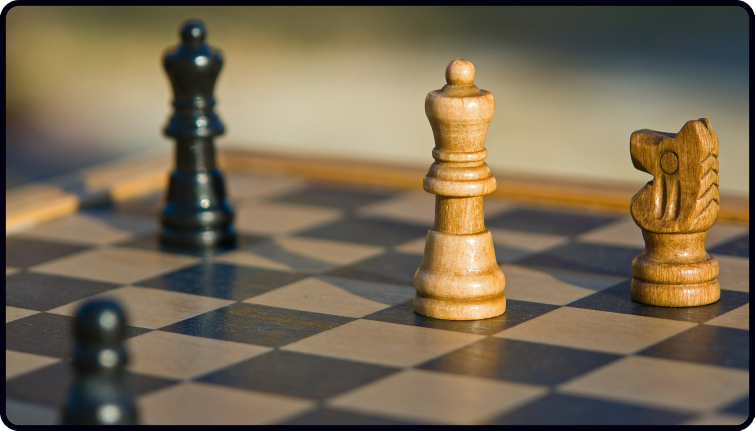 Here is another one of my Monday posts with 3 thoughts about guitar, music, and life, including thoughts on the new Netflix show The Queen’s Gambit, practise tips, and more.

I hope you enjoy it…

On Saturday night, me and my partner, Sally, settled down to watch a show on Netflix called The Queen’s Gambit.

It’s about chess, which is a game I have loved since I was a kid, but don’t really play much now.

We watched the first episode and without giving much away, it is about an orphan who gets intrigued by the game.

She sneaks off to the basement to play the game with the grouchy old caretaker once per week, while the other kids are at choir practice.

As she only gets to play once per week in real life, she ends up lying in bed each night looking up at the ceiling visualising herself playing the game, making the moves, and studying the board.

All this visualisation and mental practice helps her to improve week by week, eventually becoming pretty amazing.

I call this sort of mental visualisation playing in your “Mind’s eye”.

The Queen’s Gambit is fiction, but this sort of mental visualising and rehearsing is something a lot of successful people, including guitarists, do.

I used to do it a lot when a guitar wasn’t about (usually in boring college lectures), and it would really help.

When learning tricky songs or pieces, I still use it.

Definitely worth giving it a try as it is a powerful technique for getting your mind to learn and digest information more effectively.

I had to put practising it on hold for a while as I had other projects to focus on, but this past week I have been practising it hard.

Wow, it is tough.

There are five parts and there are parts within each part.

The piece features a Travis-picked moving bass line with a melody over the top and the tempo is fast.

At first, practising it was going pretty well, but I hit a brick wall and found progress stalled.

I went back to basics and adhered to the “Five times rule”, which in case you don’t know is where…

You aim to learn something faster by playing it five times in a row, perfectly and with zero mistakes.

Break each section up into one-bar sections…

And later work on the transitions from section to section.

There is still some work ahead to perfect it, but it is far better because I forced myself to use this rule.

Hopefully, you find the “Five times rule” helpful too, and hopefully this email gives you a bit of insight into my thought process when learning something challenging.

I didn’t realise it until yesterday, but today it has been one whole year to the day since I had my appendix removed.

It was a crazy few days, which I survived (obviously).

Without sounding dramatic, it might not have been that way though.

A few months before the emergency operation, I was in some serious pain and went to see the GP.

She examined me and thought it was a stomach ulcer and gave me some tablets and sent me on my way.

I went home and was still writhing in agony, but after about 12 hours the tablets seemed to work.

In hindsight though, according to the hospital consultant who attended to me later, there was never a stomach ulcer, and those tablets didn’t do diddly squat.

The issue was almost certainly the appendix all along.

It just goes to show even experts can get it wrong.

A GPs job is certainly not an easy one, but deep down when she sent me away, I know something wasn’t right.

A stomach ulcer seemed way off, as I have never had stomach issues in my life and never really had anything wrong with me before then.

Instead of questioning her, I followed along.

I was lucky in the end with how it turned out, but the night my appendix did burst a few months later, I was lying there thinking:

“Oh, this extreme pain is just the stomach ulcer that has come back, I’ll take one of them tablets and it’ll be okay”.

Because of that thinking, I nearly didn’t go to the hospital, and it was only instinct that got me there.

Weird story I know, but it just goes to show we shouldn’t always take advice blindly, and it’s okay to question things.

This goes for life and the world of music tuition and learning an instrument.

Anyway, I hope you found these thoughts on my week interesting, and that they were helpful to you.

If you want to learn more about my ways of teaching and learning, check this out below…

Enjoy your Monday and have a great week!