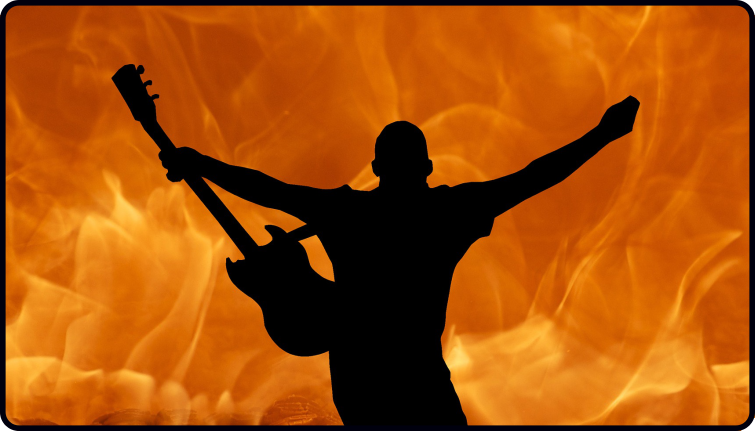 With a bit of nervousness and excitement, I took a deep breath and knocked on the door.

At this point, I had no idea that the next 60 minutes was going to be some of the most bizarre I was about to experience as a guitarist.

After a few moments, the door opened, and what I saw surprised me.

Out from behind the door came this guy with long greasy hair, tight jeans, and a big gut – looking like he had just woken up.

The blast of stale cigarette smoke hit me in the face as I stepped through the door.

This was my first lesson with a so-called guitar tutor who was supposed to be the “best in town”.

After coughing up my lungs, I politely asked him to open the window and then we sat down to play

The tutor, (let’s call him Pete) cranked up his amp to what felt like a Spinal Tap-esque 11.

He handed me the “student guitar” to use, which was as greasy as his long 80s rocker hair (he didn’t let students use their own guitars for some unknown reason).

I was playing this little cheap Strat through a practice amp that was never going to be heard due to his amp blasting the walls down.

He asked me about some bands and stuff I wanted to learn.

I only had to mention an artist or song and in an instant, his head rocked back, and he was shredding endless licks from their back catalogue.

All he needed was a wind machine to blow back his hair like Slash from Guns N’ Roses ripping it up in the desert.

I realised quickly, “don’t ask him anything about a band…ever”.

To be fair, the lesson wasn’t totally useless as I did learn an interesting little concept about the minor pentatonic scale that I never knew before, but trying to get this guy to actually teach me something was exhausting.

Mr 80s greasy rocker definitely wanted to be on stage in front of a paying audience.

Well, he didn’t have the stage, but he had a paying audience AND a captive one at that!

At the end of the lesson, once the guitars were down, he stood in front of me in the door and suddenly became super warm and friendly.

What? This guy was grumpy throughout the lesson, I thought!

The conversation was weird. He kept talking about some wild girl he knew or something.

Finally, I escaped, thinking what the hell was that guy on.

You might think I never saw this guy again.

Well, I wanted to give him another chance, so I booked another lesson with him.

The next lesson was also a bizarre one, and it opened up my eyes to the mindset of a LOT of guitarists out there (I’ll write an email about that soon).

Anyway, I wanted to share this experience with you as I know a lot of folks out there have had their own horror stories with their very own “Shred-a-lot Sam” teachers before.

I’m curious, I want to hear your own stories of lessons – good, bad, and ugly.

Hopefully, none were as bad as this guy and I hope, if you do have a teacher, he’s much more professional.

Anyway, I think that lesson was good for me when I eventually started teaching as I always used it as a reference point of what NOT to be like.

It’s probably obvious to say, but thankfully most teachers are more professional than “Pete”.

The trouble is though, even good teachers mostly lack any emphasis on teaching students how to play with proper technique from day 1.

Most teachers just teach how they were taught. That is to say, they expect students to go through the pain barrier, deal with their sore fingers, and battle the guitar until it all clicks – just like they did.

Yet, when I say technique is the biggest killer of progress out there for students and the main reason most people quit (closely followed by a lack of self-belief), I am not exaggerating.

I learnt early on in my teaching career about how important technique was and made a massive vow to solve this issue with students.

If you want to learn these answers, with some simple, yet surprising concepts, check out my “In Focus” tutorials, only available in my membership programme.

They are short and right to the point, but these are the key techniques that have helped to take some very frustrated guitarists down a different path…

…one where their playing becomes free, fun, and far less frustrating.

If you find playing tough or found your teacher never really solved these issues for you, the lessons inside will help.

Check it out below.