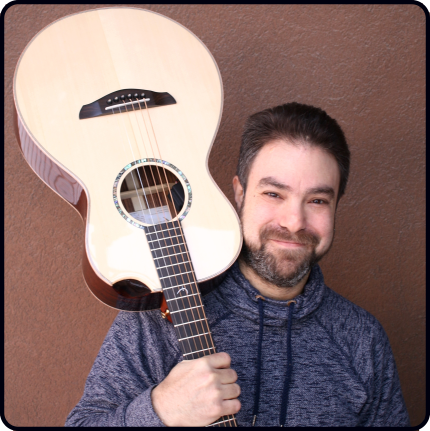 Welcome to a new Q and A.  For this one, we have Assaf Levavy from LickNRiff.

I don’t follow many YouTube channels but when Assaf puts up a new video I usually take notice. He has plenty of great arrangements which are not only interesting but original too.

He teaches everything to do with fingerstyle and fingerstyle arrangements, as well as improvisation, advanced techniques, advanced theory and cool composition ideas and tools. Check out his channel HERE.

His channel is great for intermediate and beyond guitarists and if you are one of these I think you will love his lessons.

A lot of his lessons take students down different rabbit holes than what I see from other YouTube tutors, especially for those looking to get deep down and dirty with some new ideas.

Anyway, here is the Q and A.

Who’s your favourite guitarist ever?

There are a few. I love John Scofield for his unbelievable expression and never-ending flow of ideas on the instrument. Each of his phrases is a micro-masterclass. I also love Greg Howe, who is, in my opinion, the only guitar player who actually makes melodic sense while playing at ridiculous speeds. His sense of groove and his ingenious techniques are awe-inspiring. I also love the jazz greats, Joe Pass, Larry Coryell, and Pat Metheny’s solo acoustic fingerstyle works.

The Bad Plus. They’re unbelievable. They’re a rock band disguised as a jazz trio. And they’ve done the seemingly impossible – not only is their music incredibly beautiful and complex, but it’s also FUNNY. That is insanely hard to do. Try it and see.

My biggest influence is Keith Jarrett. That’s my ‘secret ingredient’. If you listen to Keith Jarrett’s improvised piano solo concerts, you’ll immediately recognise how much I steal from him.

Oh, that’s a tough one. I don’t think I can answer that without giving a whole list… But if we’re talking guitar albums, then it’ll be Introspection by Greg Howe, A Go Go by John Scofield, Ozzmosis by Ozzy Osbourne (Zakk Wylde, yeah!) and Deep Purple’s Purpendicular (Steve Morse’s work in that album is amazing).

Most enjoyable guitar piece to play?

Bach’s “Toccata and Fugue in Dm”. Learned it, but I can’t yet play it cleanly from start to finish.

Larry Coryell’s solo guitar arrangement of “Something” by The Beatles. A masterpiece.

Never forget that there is no such thing as a mistake in music. A ‘wrong note’ is just a different mode.

Most useful or exciting scale you know?

Ironic, but the pentatonic scale, because of its movability. If you move it around the neck, it can become anything from a dorian scale to a melodic minor scale, without having to memorise any difficult shapes.

What’s the most important thing to focus on for beginners to improve quickly? (e.g. technique, theory, repertoire, jamming, etc.)

JOY! There’s so much music in the world, if you’re not enjoying a piece of music – let it go. If you’re not enthusiastic about what you’re playing, you’re not actually making progress.

Trying to play everything perfectly. Perfection will come with time. So will speed. So will expression. Focus on having fun with the instrument and making small progress every day.

Play first, then learn the theory behind what you’re playing. It makes learning theory much, MUCH easier.

What one thing would you say to a beginner who is really struggling?

I couldn’t wrap my head around theory until 15 years into my playing. Everyone struggles with something. Just give it time and focus on what’s fun for you to play and practice, what gives you joy.

Always try to hear the song in your head. If it’s a song with lyrics, then memorise the lyrics if you have to. The more you focus on the music rather than on technique and following instructions, the more your playing will become musical.

How do you advise beginners reach the next level of trying to get to the intermediate stage with their playing?

Try to learn something that’s way over your current level. You’ll play it badly, you’ll make tons of technical errors – but you’ll learn tons of material along the way. Then one day you’ll discover that along the way, you’ve improved beyond what you originally thought possible.

Music is a living, breathing thing. Technique is just a tool. Theory is nothing but a dictionary so we can communicate about music. Remember that what’s important is the music that you want to make and that you hear in your head. There’s no wrong technique as long as it doesn’t cause you physical pain. There’s no need to learn theory if you’re not ready yet. Just ENJOY your playing and try to create the sound that YOU want to create.

It was a G D7 Em C progression that a friend composed for a song. He needed someone to play it while he soloed so he taught me the chords.

An unnamed classical guitar that that same friend gave me as a birthday gift. Then a couple of years later I got the Takamine N10 acoustic.

To play Dire Straits’ “Money For Nothing”. Seriously.

To leave my fingers on the fretboard when I solo instead of lifting them when I don’t use them. This prevents tons of unnecessary movement. And to twist my whole arm for vibrato instead of moving my fingers. It’s constantly amazing to me how many people don’t know this.

I usually practice by improvising. Whatever new material I learn, I immediately start implementing it by improvising using it or over it.

One piece of equipment you couldn’t live without?

Were you self-taught or did you have formal lessons?

I started out with formal lessons, but 95% of what I know is self-taught. Then again, self-taught only means that you had thousands of teachers along the way.

How and why did you get into teaching the guitar?

I taught a friend a song in half an hour. He complimented me on my teaching skills and said that I must do it for a living. I listened. Same thing happened with starting the channel, it was a student who asked why I’m not making any online video lessons and convinced me to do it.

What was your best moment of being a teacher?

My favourite moment is that ‘a-ha’ moment when people understand a concept. The gleam in their eye, their surprised smile. I love it.

Where does the future of guitar tuition go in your opinion?

It will stay pretty much the same. Some will learn online, some will learn with a tutor, some will do both. Some’s tutor will be via video calls. Maybe someone will create a VR tool to learn guitar, which will be really nice, but it will just add to the mix, not change it.

Which guitarist would you most like to jam with and why?

Probably Tommy Emmanuel, because the guy is made of joy and would make great conversation pre- and post-jam.

Which superhero would make the best guitarist?

John Constantine. With his amount of baggage, he’ll play the blues like there’s no tomorrow.

Venue or music festival you would most like to play?

Any open-sky music festival would be great.

Your best moment of being a guitarist so far?

When I got an email from a guy who told me that my online lessons kept him from committing suicide. I almost cried.

During a band show with bad monitors, I thought the bass player was out of tune for an entire song, then when the song ended, I discovered it was me.

Most overrated band/artist ever?

While I have a few candidates in mind, I must say that any artist that makes audiences happy and entertained is doing something right, so who are we to judge?

Song you’d most like to learn but haven’t yet?

“One Plus Two Blues” by Larry Coryell and Philip Catherine. It’s a blues made entirely from diminished scales. Sounds way more awesome than you can imagine.

Most underrated band/artist ever?

Ever? I have no idea. But as far as guitar players go, that’s Greg Howe. The guy is a guitar deity and so few people even know his name.

What’s next for you?

Emailing you these answers. Kidding. Work on the soloing lessons I plan for LickNRiff.

Thanks to Assaf for an interesting Q and A. That was super interesting!

Leave a comment below letting me know what you think of it and check out his channel. If you have watched his lessons before, let me know how Assaf has helped you on the guitar.