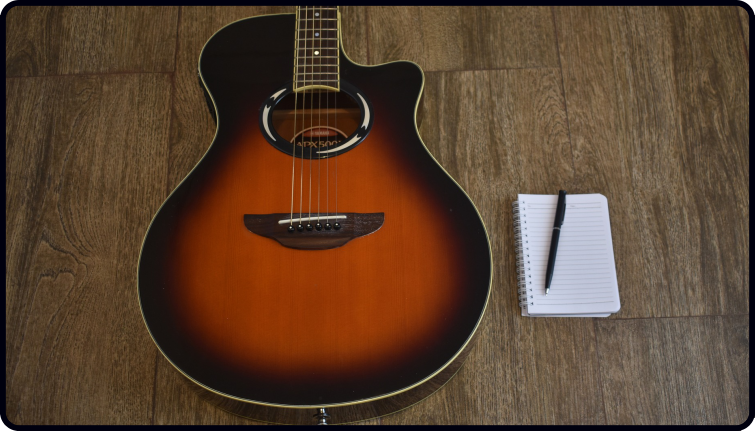 Here are a few tips that I’ve discovered and developed over the years and that have come to mind lately.

I hope you find them useful.

Record all your jams – I love to jam and when I do, I often get my smartphone out and hit record. Not only is recording your playing good to track your progress and hear how your playing sounds objectively, but it’s also good for tracking ideas too. You can get a nice back catalogue of ideas just by recording yourself freestyling once a week or so.

Don’t start with a blank canvas – One of the easiest ways to write music is to take something tried and tested. I don’t have the songwriting skills of Paul McCartney (not many do) so trying to write something completely from scratch can be daunting. Often, I find taking a song I like and adapting it bit by bit, so it no longer sounds like the original is fun. I did it the other day with “Return to Sender” by Elvis Presley. Here’s how I did it…

Adapt one step at a time – What I did with “Return to Sender” was play it with a capo to change the key, I slowed down the tempo, and instead of strumming it, I played a fingerpicking pattern. Guess what? I then added my own little vocal melody and by the time I finished, it sounded nothing like “Return to Sender” but sounded totally original. This was easier for me than trying to write from scratch and it was a fun process too.

“Write 10 songs a day and throw 9 away” – I’m pretty sure it was Bob Dylan who said this or something along those lines. That guy knows a thing or two about songwriting! For me, I’ve never actually written ten complete songs in one day, but I get the point he was making. Instead, I’d jam a few ideas. Some things sounded okay or rubbish, and others would stand out big time. Obviously, I kept the good stuff. The point is, the more you do it, the better you will get. Songwriting is a muscle we need to flex and train more and more. So get flexing those muscles!

Right, I could write for ages on this subject, but hopefully the above will give you a few ideas.

If you want more tips and help with your playing, look no further than my eBook bundle.

It’s designed to help you fix the 7 stumbling blocks that trip up most beginners, but it’s also full of ideas that will expand your thinking when it comes to creativity.

Find out more about the eBook bundle here

I hope you enjoyed those tips!