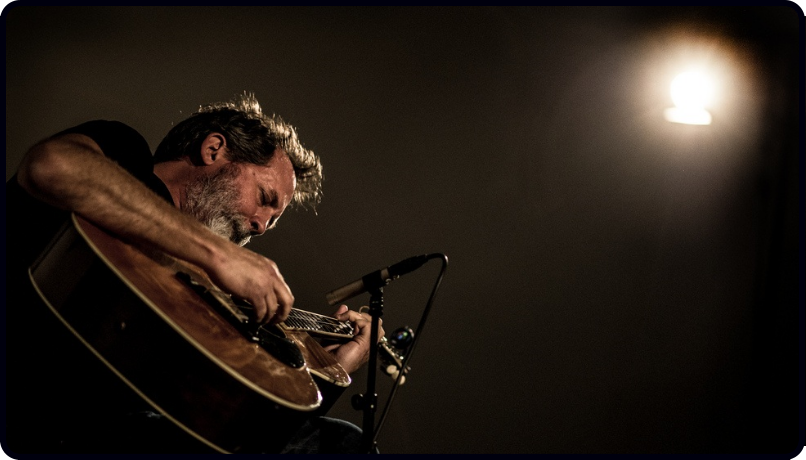 Bill Orcutt in Oslo, Norway by Cyndifelton, licensed under (CC0 1.0)

As you know this blog is made for the older student looking to learn and improve their guitar skills. Unfortunately, there are a lot of myths involved with this amazing instrument of ours and many of these myths are so ingrained into students who are learning later on in life, that it is detrimental to their playing. This is a very important guitar lesson for older adults.

Some of these myths are old school myths that are finally starting to die out, but as an older student, you may have heard these for the last 40 or 50 years and therefore have them deeply ingrained – even if you have only recently started playing the guitar. Some of these myths are associated with ageing but as you will see none of the myths has any validity in the real world.

Let’s look at these depressing myths and dispel them once and for all – and doing so will allow you to improve at a healthy and more enjoyable rate!

Most of my students, both in real life and on this blog, are over 50 and many are over 60. Most of these players are passionate about music, love playing the guitar but have the nagging belief deep down inside them that they are too old to learn.

In the early stages of tutoring a student, I often hear things like:

The truth is, you are never too old to learn, so get this belief out of your head completely.

As long as you have a decent brain and are in good physical health then you are more than capable of being a fine guitarist who at the very least, can play the songs they love. I have taken many retired students from having a lifetime of never playing any instrument (apart from maybe the odd trombone lesson 50 years earlier in school!) to being fine guitarists who can play all the pieces they want to play at a high standard.

I often had to work a little harder with these students than the younger ones, simply because they believed this myth.

The belief that learning a new instrument is for younger people is something these older students have heard said by others, and society in general, a lot – but it’s simply not true.

Some cultures are a little more encouraging of older people learning new things. In Sweden, it’s very common for retired people to learn new skills, such as a second (but more often a third!) language and to take up a new instrument.

There are thousands of older students, many older than you, who are learning and improving on guitar (and other instruments) every day. There is no reason why you can’t be one of them!

This is one of those silly myths that has been around forever but no one really questions it. I think it came about as almost a “badge of honour” type thing.

With most acoustics being harder to play than most electrics (all things being equal that is), you have to battle harder to play it and therefore you will “earn your stripes” with your playing.

Acoustics can be harder to play (and more expensive to get a decent one) but electrics can be more fiddly for getting a good tone, more things can possibly go wrong (amps, wiring, leads, etc.) and they can make fingerpicking technique harder for the picking hand (due to the strings being closer to together).

I actually recommend you start with the type of guitar that you have a preference for and that’s it, but if you are feeling 50/50 about it and have struggled on an acoustic in the past, try learning the basics on an electric and then switching to an acoustic 6 months or so down the line if you eventually want to play acoustic.

Electrics are much easier to set up and adjust which makes them much more playable with just the turn of a few screws. Acoustics, on the other hand, are harder to set up.

I usually recommend most guitarists get one of each eventually anyway as this is the most fun!

The bottom line is, if you prefer the sound of an acoustic, learn on one, (just ensure it is well set up), if you prefer electric, go electric, and if you don’t mind either way, then get an electric as you will find the journey a little easier.

#3 – “You should have calluses on your fingers!”

I hate this myth. It is absolute, 100% nonsense. You do NOT want calluses on your fingers. You only want your fingers to harden up just enough to be able to play the guitar well and with ease.

This a really important lesson as well as a myth that needs busting once and for all.

Thankfully, in some circles, this myth is starting to die out, but I know some of my students who have friends who have played for 30-40 years have these friends give them tips and advice on doing stuff like dipping their fingers in vaseline to ease the pain and help the calluses.

The truth is, this is all pointless.

Just read this post, don’t press as hard as you have done, and use good technique. If you do so, your fingers shouldn’t be sore!

You should always aim to play with the softest, lightest and most gentle touch with the fretting hand.

If you do so, you will find you won’t have sore fingers, you won’t need calluses and your playing will be 1000 times more enjoyable.

I don’t have calluses but I used to. Why? When I started out, I pressed way too hard, built up the calluses but when I realised (years later) that I should play with a light touch, the calluses started to soften.

Calluses are usually a sign you are pressing too hard. Good technique and a light touch are essential. Play about with random notes on the fretboard, get close to the fret and try to press as softly as possible while still keeping the note clear.

One of the issues holding back older guitarists is they forget new things they learn faster than younger students.

On the surface, you might think it was because of their brain deteriorating and that’s what many people think, but in my experience, one reason younger students learn and remember things faster is because they are more “primed” for learning than older students.

What I mean by that is that the older student usually hasn’t learnt any new skills for years and often, decades. They come to learn the guitar totally out of practice with how to learn a new skill.

Younger folk, on the other hand, particularly those of school or college age are learning all the time and their brain is switched on for learning.

It takes older people a little while to get back in the swing of things but thankfully once they do, the snowball effect takes place and learning new things on the guitar makes learning more new things easier.

The key thing here is to ignore this myth and get the ball rolling with your learning. As long as you follow the “Golden Rules” of learning you will do well.

#5 – “Older people get dementia as they age”

Just because we are all getting older doesn’t mean we are doomed at some point to suffer from the horrible effects of dementia. Yes, it occurs more in older people but this is not simply because they get older but usually due to other factors.

Some of these factors can be controlled by a healthy lifestyle and stress-reducing activities (it’s a good job we play guitar then!)

That happens to everyone.

Something that is annoying is, if a young person forgets something, it is regarded as perfectly normal and most people don’t think about it. If there is a similar lapse in memory in an older person, the ideas and beliefs about the decline of memory with age quickly surface, and some people I know even panic a little at this.

The good news is that guitar playing is great for the brain and body because it forces you to engage lots of areas in your brain, it helps reduce stress by playing beautiful music, and it even helps many people to socialise.

You don’t need those brain training apps that were popular years ago, guitar playing trains your brain better and is more fun!

This is another myth that stems from many old guitar books and teachers (real life and on YouTube) who like to preach strumming is easy, when in fact, being able to play a handful of strumming songs, is actually tough.

If you love strumming, yes, you should learn how to strum, learn the core strumming patterns and spend a healthy amount of time improving your overall strumming skills.

It might be a bit of a strange thing for someone who has just released a strumming book to say don’t spend all of your guitar practice strumming.

There are lots of benefits and joy to be had from strumming and getting good at it is a critical skill but make sure you also spend time doing the other fun things on the guitar. These things include fingerpicking, learning riffs, playing a bit of blues, etc.

Most of my readers love to fingerpick but sometimes get discouraged by others who tell them beginners should only focus on strumming.

A couple of my students tell me that their other guitar-playing friends only do strumming songs with their teachers and don’t even touch fingerpicking, blues or learn any riffs!

I can’t imagine they are having much fun. Variety is key to getting good at this instrument, having fun and becoming a more rounded player – especially for beginners.

This is wrong and deep down hopefully you know it.

The truth is, these people aren’t born with these skills. They have developed them over time by practising them. They may not have practised them in obvious ways but they have certainly practised them.

Rhythm is something we should practise in all of our day-to-day lives. That is how non-musicians (or muggles as I like to call them!) improve their rhythm skills without realising.

Some people are constantly dancing, tapping their feet to the music, nodding their heads to grooves and generally feeling the music and some don’t do this at all. The ones who do all the shakin’ and a-groovin’ are the ones improving their sense of rhythm all the time.

Imagine the difference between two people, one who does this sort of thing for 50 years and one who doesn’t.

If you feel you have no rhythm, spend some focused time on improving your rhythm skills, about 10 minutes per day and in a few months, you will have more groove than Michael Jackson and John Travolta having a dance-off at a late night disco!

There you go – the above are some really frustrating myths which have hopefully now been dispelled so you can get on with enjoying your playing.

This will serve as a good guitar lesson for any older adult out there. There is a lot of psychology involved here and as someone who studied psychology at college, I am still fascinated by beliefs and the way they impact someone’s success.

Remember, there are a lot of benefits that come from getting older. Life experiences, valuable lessons learnt and a greater knowledge of what you love in music and life. Younger folk don’t have this yet.

I’d love for you to leave a comment and let me know your experiences of learning guitar later on in life, what challenges you have faced and how you feel about them now. Leave a comment and I’ll get back to you on this blog page with any tips or advice you need.