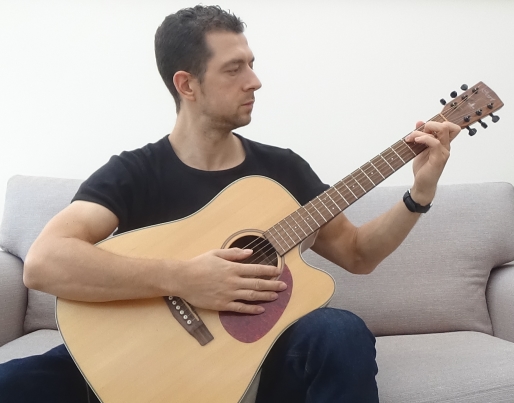 Many people have no idea how to actually sit with their guitar for the most optimal playing comfort, efficiency and technique. Some sit in a downright terrible way. This places a huge strain on their wrists, leads to their backs being hunched over and their guitar being placed at a weird angle.

In this two-part post, I’ll explain why it is essential that you start sitting in the proper manner, why most teachers get it wrong, and what you can learn from the sport of golf. Most importantly I’ll show you what I have found to be by far the most optimal playing position for guitarists.

This means there is no consistency to their playing. One day they will be sitting in a certain way and the next in a different position.

Some days they will sit upright in a good position and others they will slouch back in an armchair in a totally different posture.

If you wonder why some days you can play better than others, this could be the reason. 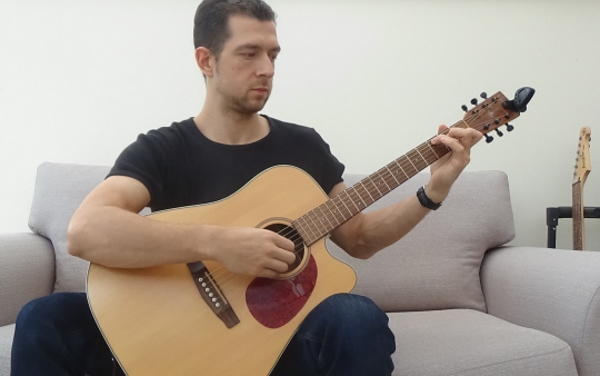 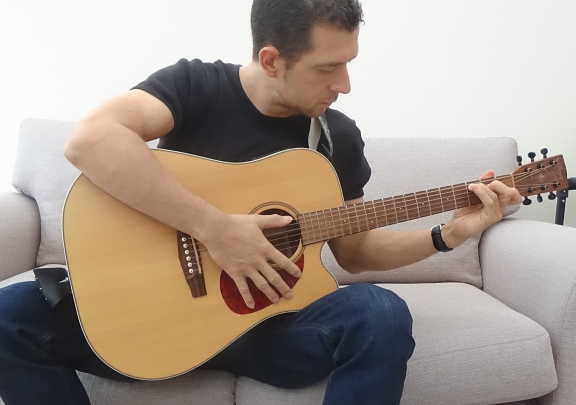 Many guitarists, even experienced players, often don’t pay any attention to this but then get frustrated when some days things which should be simple, such as getting clear chords, are easy and other days there is the sound of the oh-so-annoying ‘muted strings’.

The test I use to identify a bad playing position is the D Major chord. If you get it right some days and other days your playing makes you want to jab things into your eyes out of frustration, or give up the guitar to live like a flute playing hermit, you may have bad or changing playing positions.

Everyone has had issues with this chord at some point, specifically with the high E string being muted by the back of the ring finger which is placed on the 3rd fret of the B string.

If you have never had this issue, I don’t believe you even play guitar!

There are lots more examples of how just changing your position and posture slightly can cause issues with not just the chords but everything else. It can make all the following awkward:

Chord changes might be slower as the awkward position causes too much tension in your body, meaning you would be fretting the notes with far too much pressure.

Playing with too much pressure is an important point to remember that relates closely to bad playing position, one I cover in my course Ninja Chord Changes.

Scales, riffs and melodies may be played with errors as you might be holding up the weight of the guitar with the fretting hand or your thumb might be sticking too far over the top of the neck.

Either of these can cause a misalignment of the fretting hand fingers in relation to the fretboard. This can easily cause you to place your fingers down not quite on the string but slightly off it, causing the dreaded sound of a ‘buzzing note’. This is most common with beginners.

Fingerpicking and strumming tone would be weaker as when the guitar is not at the right angle your fingers – or pick – can easily pick down the string, causing a scratchy and unpleasant tone.

Barre chords too could be affected as they require great technique and some strength (not a lot, just enough) to be able to play cleanly. Also, with barre chords, it is important to be able to change to them quickly which many people forget to mention.

Poor playing position can cause a ‘crooked wrist’, which means you can’t inject much strength, and the strength you can apply will put more strain on your wrist which is not good for your long-term playing or health.

If you find there is no consistency to your playing, or your technique frustrates you, then you absolutely must take a close look at how you sit with the guitar.

Imagine a golfer doing this!

I often use this analogy. Imagine a golfer. If he were to wear his normal golfing shoes while playing, he would be okay when smashing the ball with his driver.

What would happen if one day he forgot his shoes and had to play barefoot?

He would be an inch closer to the ground and his whole posture would be ever so slightly out. This might cause him to hit the ball 2, 3, or 4 mm lower (or maybe higher) than usual and the contact just wouldn’t be the same. The ball could go anywhere.

Imagine one day he instead rocked up in 6-inch high heels (now a golfer in 6-inch heels is an interesting thought!) The ball could go literally anywhere!

You are misaligning parts of your body, sometimes only a little and other times a lot. You then have to work really hard to overcome these issues, whether you realise it or not, and this gets in the way of your playing.

Take some time over the next week to think about and see how you actually sit with your guitar. There are no actual rules on how to sit – or even stand – with it, but there are guidelines.

I will go through them in the next part of this post, exactly what you should and shouldn’t do, but first become aware of what you are doing.

Ask yourself these questions and watch out for these things each time you play.

In the next part of this post, I’ll go over what I believe is the perfect playing position for maximal efficiency, enjoyment and technique.

This position can make a huge positive difference to the playing of a struggling beginner as well as being useful to more advanced players.

Being aware of this will make a positive difference.

Leave a comment below and let me know what your thoughts are on your playing position;

To make it more fun, the writer of the best comment will get a free copy of my eBook on fingerpicking technique, Fearless Fingerstyle.