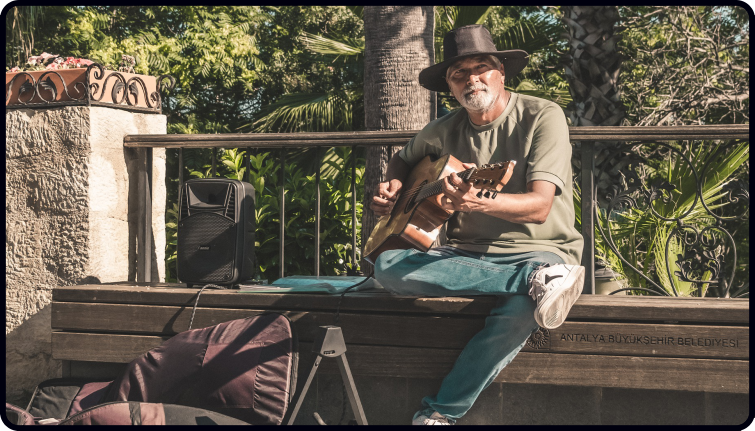 “You have to be born with natural talent!”

“I’m rubbish at guitar and I feel like I’m going backwards!”

Those are all things I’ve heard a lot over the years from new students.

In fact, in the past, I said some of the above out loud to myself many times.

Well, let me share with you an example which highlights how incorrect (as well as dangerous) this sort of thinking is.

Yesterday, I talked about something which resonated with many of you.

I talked about how my friend was so much better than me at guitar when we were both learning.

That is, despite us both starting to play guitar around the same time.

Not because he had superior natural talent.

He’s the first to admit that wasn’t the case…

…but he was certainly a lot better than me at guitar when we were both 15 and at school.

It was a bit annoying for me as we were the same age, yet I was always getting better grades than him in school, and I was always a really good athlete.

In short, I think I felt slightly arrogant that I should be at least as good as him.

…But no, I had to learn a lesson the hard way.

Nothing in the world of music is put on a silver platter for you.

You have to work at it of course.

Well, my friend (also called Dan, but we call him Sefton as that’s his last name) was much better than me and here’s why).

I remember picking his brain, trying to find out why he was so good.

I also paid close attention to what he was telling me about how he’d practise.

These were some of those things…

Focus – he didn’t practise “willy-nilly” while watching TV as I did. He really focused with all his concentration when practising.

Visualisation – he told me he would sit at school and daydream about playing guitar. I know that enjoying the feeling of mentally seeing your fingers fly up and down the fretboard is useful. In fact, this sort of thing has been shown to keep you motivated and excited when learning anything new.

Backing Tracks – he would put the CD on for the song he was learning. He would then play the song over and over until he got it right. He joked it probably drove his mom mad hearing the same song 1000 times!

Ears – one thing he also did was to work out songs by ear (he didn’t trust TAB and it was hard to get a hold of TAB back then). This took time and dedication too, but he did it and it certainly improved a lot of aspects of his playing.

Played other instruments – little did I know, he had already played keyboard for years when he was younger. This, no doubt, helped him learn some core musical skills. I, on the other hand, had never played an instrument before.

Rhythm – at a similar sort of time to learning guitar, he was also learning drums. I always joke drummers make really good guitarists. Mainly because they have great rhythm skills, and once they learn the technical side of playing guitar, they get to quickly put these skills to good use.

“Zoning in” – he was also really good at disciplining himself to work on any weak areas he was struggling with. I, on the other hand, used to just skip the hard things and jump to the next thing.

Dedication – above all, I think his dedication was 10x that of mine at the time. This kept him going, made him really determined and gave him faster progress.

…Some useful pointers which I hope you found handy!

For me, once I changed my practice behaviours to mimic those of my friend a bit more, my progress very quickly sped up.

We lost touch for a few years after school but ended up having a few jams together, and he was shocked by how far I had developed as a guitarist.

I owe him a lot for the inspiration and advice.

We ended up playing in many bands together over the years and had an absolute blast.

He’s still my best mate 20 years later and at some point, in the next few years, we will no doubt get back into a band together again.

Anyway, if you have any nagging feelings that it’s all about “talent” …

“Talent” may play a very small part (about 5% but no more, I reckon), but how you practise is way, way more important!

I hope you found that useful and let me know what you think.

…And if you want more help on getting the most out of your practice and playing, then check this out…