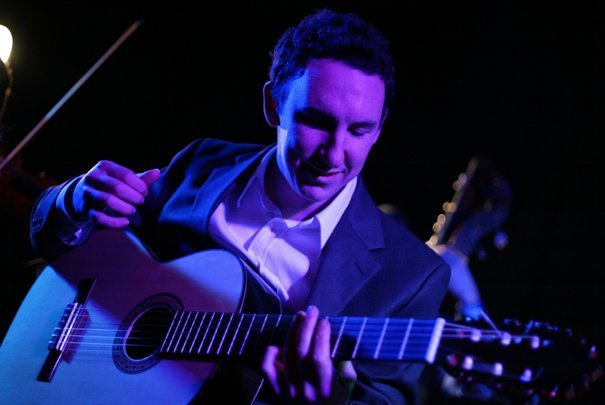 Welcome to our 3rd Q and A. So far we have had our first two with singer/songwriter Harry Harris, and super popular YouTube guitar teacher Drue James and now for this month’s we have session guitarist Mike Georgiades.

He has done session work for all sorts of people, brands, video games and TV shows including Pizza Express, La Tasca, Top Gear, and Assassin’s Creed.

Mike’s extensive back catalogue of work in the industry makes this a particularly exciting Q and A. Read on to hear Mike’s thoughts and pick up some of his best guitar playing tips.

Being primarily an acoustic guitarist, I would say Elliott Smith, for the quality of his guitar sound (especially on his album ‘Either/Or’) and for his great songs.

The band Clem Snide I saw a few years ago were great! Amazing energy, and they did unusual things like one player disappearing and returning from the back of the room playing a tuba.

Difficult to say as the answer changes over time… Probably Nirvana’s Nevermind for the impact it had on me as a teenager.

I mentioned Elliott Smith and you cannot beat his music for authentic musical depression. Probably the song Fond Farewell.

I love playing a good Gibson J45 acoustic, which is a very warm sounding classic acoustic.

You as a Guitarist

Recently I’ve got into arranging well known piano classical pieces for the guitar, which was a challenge to get the feeling of depth and sustain as on a piano. Tunes like The Swan worked out well…and turned out quite challenging to play!

Kurt Cobain, although not being a typically ‘great’ guitarist, showed me the power and energy of music through simple guitar riffs and the way his power chords worked with his melodies.

I started classical guitar at the age of six, but my first riff was probably Johnny B Goode, as the film “Back to the Future” really got me into the electric guitar.

My mum says I tuned a toy guitar to a perfect chord, so she bought me a proper guitar and some lessons straight away. I just went along with it!

I bought an Ibanez electric guitar at seventeen when into metal music. I later regretted the annoying trem bridge and sold it for a nice simple Telecaster.

Formal lessons in classical guitar from the age of six. Every other style I have picked up myself.

I have used open D tuning a lot, but also it’s fun just to create a random tuning and mess around. You can stumble across loads of good ideas that way.

I think “Blame It On The Boogie” would make a good solo guitar tune and plan to do that next!

Your Music and Gear

Playing a while ago on a boat on the Thames on a sunny evening with free drinks. Hardly down the pit is it?!

For live work I play acoustic/classical guitar through and AER Compact 60 amp. Studio-wise, I have a project studio with an ever-growing collection of instruments, microphones and (mainly) software plugins/effects.

I quite like playing Mr Sandman on solo guitar for some reason. May well be “Back To The Future” linked!

I played guitar with a flautist in a concert and his phone went off mid-tune, and continued to ring for the rest of the piece.

I mainly compose instrumental music, so it’s usually a mood, started off with a simple idea like a riff or chord sequence, or a fragment of melody that you can then develop.

Who would you most like on backing vocals with you – Dave Grohl, Rihanna, Barry Manilow or Chaz and Dave?

Chaz and Dave as I’m a Tottenham Hotspur fan.

It’s really difficult these days as everything is saturated, with very little money in the business. For that reason I think people should try and get into their local scene (if they have one) and really go for something ‘different’ whilst being ‘themselves’. I think audiences will always love authenticity, and so much of modern music is about marketing and acting.

I don’t usually practice these days as I tend to develop tunes as I play gigs, but it’s important to have a daily routine for serious improvement – I used to do two short (30 mins) practice sessions each day.

Am9, sends me into an introspective trance.

Youtube is obviously great for learning any style, but getting a teacher is better.

It was to try not to ‘try’ when you play, especially with the hard bits.

I have a few pupils and always say practise slowly in small phrases, doing each phrase three times, and on the third time get it perfect (and if you cannot then return to repeat the process later). It’s very tempting to rush through the music but that doesn’t get you very far compared to phrase practice.

Most useful bit of advice you have learned from being a session guitarist?

It’s good to be able to work from different sources, such as sheet music, TAB, audio, midi, or creating your own lines from chord sheets or just descriptions (from non-guitarists).

Most useful bit of advice you have learned from performing?

You have to authentically get into the music you are performing (in effect, ‘be’ the music), which in turn brings you in to the moment and eases pressure and anxiety. It took me years to achieve this.

Advice for anyone looking to make full time income from playing the guitar?

Do all these things: have an online presence (website with demos/past work, social media engagement, get listed in search engines etc), have a niche (style, area of the world etc), meet people, regularly contact people who may require your services.

I always liked the Green Man festival, saw John Renbourn (from Pentangle) who was great.

My old band ‘The Godlies’ that never made it.

If you want to check out Mike’s music, website or get in touch for his session work you can do so via his websites Guitarist Composer and Mike Georgiades.