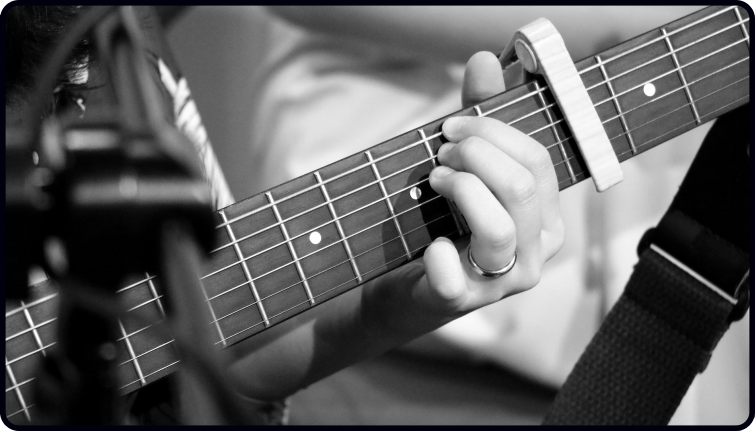 When I was learning guitar, I was always told that using a capo is “for cheats and wimps” and stuff like that. The fact is if I would have started out using a capo, I would be a better guitarist for it now.

I would have learned more songs quicker; I would have jammed more, joined more bands sooner and got bitten by the guitar bug much sooner.

All of that would have led to more skills, more confidence and much more desire to practice during the ‘struggle years’.

Below is a list of 8 very good reasons why you can and should own a capo. This goes for guitarists who are brand new to the instrument or players like myself who have played for over 16 years.

Yes, I still use and love using a capo at the right time.

One of the greatest pros, for many guitarists, especially beginners (or those who are mainly singers and want to accompany their singing), is the fact that using a capo allows you to play more songs with less chords.

If you can learn just 5 chords, be able to change back and forth between them, you can play 1000s of songs when you use our trusty old friend—the capo.

Yes, what a winner. The simple chords of G, D, C, Em, Am will open up new avenues to your guitar playing that might not have yet been discovered. Download your free mini eBook here to learn those five along with a few others.

If you wanted to learn those songs in a simple acoustic strum-along manner, and you were not using a capo, you would need to learn a lot more chords than just G, D, C, Em, Am.

In fact, you would need to use a variety of barre chords and different chord shapes.

Ouch! For a beginner, that’s a lot of work for just being able to play some simple (but awesome sounding) strum-along songs.

We have all seen those chord books titled something like ‘Learn 60,000 chords’ or something similar. For most guitarists and especially for beginners these books are garbage.

If you have ever listened in detail to The Smiths, you’ll know that Johnny Marr loves to play some really cool chord voicings. These chord voicings often aren’t possible to play without using a capo.

Some people think, wrongly, that a capo is a cheat’s tool. I’d like them to say that to Mr Johnny Marr. He would probably smack his guitar around their heads, or maybe he is too cool to do that and he would just laugh.

Anyway, if you want to learn how using a capo can be used as a creative tool to create songs, check out The Smiths and songs such as ‘Big Mouth Strikes Again’.

Without using a capo, that song and many other of The Smiths songs wouldn’t be possible to play.

It’s not just The Smiths though. Songs such as ‘Fast Car’ by Tracy Chapman and ‘Scarborough Fair’ by Simon and Garfunkel (both of which are in my Fingerpicking Classics course) would be impossible to play in the original key without using a capo and those capo songs are just the tip of the iceberg.

Every now and then a student of mine will tell me how much they really want to learn how to write songs, or even just write one really cool song and record it.

Anyway, they often tell me they have no idea where to start. There are loads of different techniques you can use to write a song, but one I love to use with students is where you adapt a song you already know to a point it is no longer recognisable to the original, but is unique sounding to you. One of the ways to do this is to use a capo.

You can take any song you know how to play, let’s say ‘Let It Be’ by The Beatles.

If you were to then change the strum pattern it would sound even more different.

Change other aspects of the piece and it will become even more different. The first step was changing the capo position.

It can make things sound drastically different and is a really cool tool for songwriting.

You can even take your favourite chord progression and play it with a capo up in different positions for a similar effect.

To see how using a capo can be a really cool songwriting tool, check out this little video I made a while back.

#4 Changes the key to suit a singer

Imagine a funny little scenario. You are jamming with a singer and this singer’s name is James Blunt. Let’s say that charming twit who is well-loved and well-hated in equal measures is your jam buddy and he turns around and says to you:

“Hey, man, let’s cover You Are The First, My Last, My Everything”

“Dear James, your voice is very high pitched and dear Barry’s was the opposite end of the spectrum. He had a deep, rich and very low pitch. How the hell are you going to sing that with your high pitched voice of yours?”

“The answer, my old deary”, James says, “is to put the capo on and play the song exactly like before.”

Yep, using a capo is a wonderful tool for changing keys to suit a singer’s voice. If you are taking a song that is in totally the wrong key for a singer, you can put a capo on to make it higher, or if there is already a capo on, move it higher or even move it lower if the song is too high for the singer.

When women play and sing songs originally sung by men, they sometimes like using a capo as, generally, females have higher pitched voices than males, but as Geddy Lee from Rush will attest to this isn’t always the case, but that’s another story.

Using a capo will almost always make the chords feel a little easier which will allow you to play more songs and have more fun which will encourage you to practice more. All of which will make you a better player.

Feels easier? Unless you have exceptionally large fingers and/or a guitar with a neck that is too small for you, you will probably find using a capo that little bit easier.

Of course, some folks will moan, and say:

“Why should you make learning guitar easier? It’s better to learn it the tough way, like a real man”.

I’ve spoke before about these misguided fools who like to make learning guitar harder than it needs to be.

Also, because the chord feels easier to play they are often easier to change to and from. The frets are just that little bit closer together which makes playing the chord easier and as your fingers don’t have to travel as far makes the changing of chords easier too.

I’m a fan of making the instrument easier and more fun. I hope you are too. Ok, glad we cleared that up.

One of the perks of playing things higher up the neck of the guitar is that for most guitarists it feels a little easier on the fingers.

The amount of pressure needed to fret a note at the 6th fret for instance rather than the 1st fret is usually noticeably less.

Using a capo anywhere above the 1st fret usually means the student will stop needing to press as hard and because they don’t have to stretch their fingers a lot when playing chords they are more relaxed.

Being more relaxed is a very good thing as it means a student can focus on using the ‘Minimum Pressure Required’ technique which I discuss a lot in Ninja Chord Changes.

Using the smallest amount of pressure required to fret a note cleanly will allow you to play for longer and with less soreness.

Keep that in mind especially if you suffer with sore fingers after a practice session.

Play a G Major chord with no capo. Have a good listen to the sound.

Now, put a capo on at fret 5 and play a D Major chord.

Have a listen to the two.

Both chords you have just played are in fact G Major chords. If you are wondering why, then you may need to understand some of the music theory behind what happens when using a capo.

Basically, playing a capo changes everything. The chord shape you play becomes a different chord when a capo is involved.

The point here, though, is not the theory behind it all (that’s for a future post), but it is the tone that both of these different ways of playing G major gives you.

Play them both again and really listen.

They sound similar but one is deeper and bassier and the other is thinner and janglier. It’s a matter of opinion which one sounds best (depends on the situation).

When a student plays a song such as ‘Brown Eyed Girl’ which is mainly a:

I often show them how you can play it by putting a capo on fret 7 and play the shapes of:

Those chords with a capo on fret 7 sound the same, but with a different tone.

Try it if you don’t believe me!

The two tones complement each other really nicely and create a different flavour which is handy for when two guitars are playing the same parts.

#8 Using a capo gives your left hand a rest

Recently, me and Dale, the other guy in my new acoustic project were jamming out some songs, and one song we did was The Jam’s ‘That’s Entertainment’. I decided to play it without a capo and go through the whole song just playing it with barre chords.

Playing the song with barre chords was no problem, but after a couple of minutes into the song I was thinking to myself, my left hand is actually starting to get a little tired as we had been jamming for about 90 minutes already.

Playing it without using a capo meant I had to play nothing but barre chords throughout the song so my left hand couldn’t rest. I realised how rarely this does happen in the songs I play. Usually a lot of barre chord songs will have moments where your fretting hand will have a breather. Not this one.

The songs we were jamming prior to this one were all tiring on my fretting hand, so I could have done with a breather. Putting the capo on and playing it that way would have allowed me that breather.

If you play long sessions and want to give your fretting hand a rest, learn my lesson and start using a capo. You don’t get extra marks for making things tougher.

Give your fretting hand the occasional break when it needs it.

There you have it.

8 different reasons why using a capo can be a very good thing for your guitar playing. Don’t let anyone tell you they are for “wimps” or “wusses”. They are probably just wishing they used one when starting out.

Leave a comment below and let me know what your favourite song to play with a capo is. There are many I’m sure.