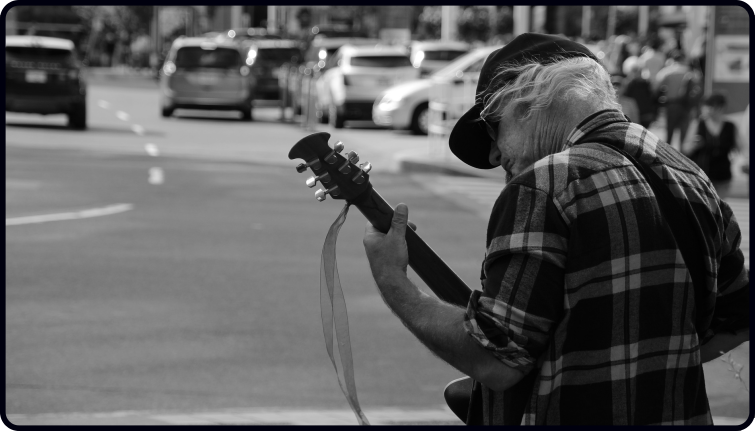 Welcome to a new Monday post with 3 random thoughts on all things guitar, music, and life, including simple fingerstyle songs, a hero’s journey, and more.

My latest film was the classic western Shane which I had never seen.

Westerns aren’t everyone’s cup of tea (I love most film genres), but this was a gem.

Shane doesn’t want to be a gunfighter anymore, but he has to, one last time.

Unlike modern films, this builds slowly with its lush cinematography, steady pace, and characters you really root for.

Then, you get the reward of a classic ending.

One where you have to invest, take your time and enjoy the process of what is happening.

Do that, and like Shane putting on his six-shooter one more time, and beating the bad guys, you will get the rewards.

Take your time and enjoy the journey of learning your songs.

It is much more fun that way.

#2 – Sometimes you gotta be ruthless

The other day I got an angry email.

This guy was fuming because his Kindle broke and he couldn’t download the books by me that he had purchased from Amazon.

I offered my help but instead of being thankful, he sent another angry message telling me “Your actions are unconscionable and unethical. You have to set matters right”.

That is just part of the email.

He seems to think I snuck into his house, hunted for his kindle, and deleted all my books from it while cackling like a smug villain.

The truth is, I have no control over what Amazon does and no doubt, as his receipts are stored with them, he could email them and they would help.

The thing is though, he didn’t want to know and was way too rude.

He was deleted from the list and I blocked him from re-joining.

A while ago I decided to be more ruthless in many areas, and it has made me happier for sure.

One of these areas is learning and you can do the same.

For years now, I have focused more on the stuff I love to play and the stuff I really need to fix.

Everything else, all the filler and other stuff, I get rid of.

Being a little more ruthless like this works in life, work, and guitar.

I recently dusted off a lovely piece I wrote many years ago.

It was written for fun, but it made it into my old book, Fearless Fingerstyle (in the chapter titled, “Partial Chords”).

I no longer sell this book, but it has some great simple fingerstyle songs in it.

This one, in particular, is basically two fingers which move up and down the same string to create a Major and minor shape.

The piece is an example of the lovely sounds you can create using just a simple idea. Simple fingerstyle songs can be a joy in your playing journey.

You can learn the piece and technique in the DTAA as part of the members-only bonus.

To get it, you have to join by the last day of the month.

After that time, it disappears.

Find out more about the membership here:

Have a wonderful Monday!