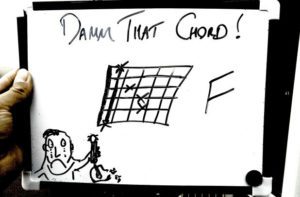 Well, fear not fellow guitarist. In this post, I’ll show you how to play the chord of F Major in a progressive manner starting with the hard versions and then breaking these down into simpler forms.

I’ll also show you how to play an unusual inversion of the chord too which can really add class to your playing in certain situations.

A while back I showed you multiple ways to play the tricky B minor chord on guitar and more recently the B flat chord on guitar which is also a challenging chord to play. The chord of F is a more common chord as it is in the key of C Major—one of the CAGED keys on the guitar.

The F chord is also used in other keys too and quite often when a musician is playing in the key of G Major they will substitute out the F# diminished chord to bring in an F Major chord. This makes the F really important.

Here are a bunch of songs that use the F chord (most don’t use a capo but a few do).

How to play the F chord on guitar

This is the version of F that is most feared by beginners and I can see why. It is a tough chord. Barring across all 6 strings is tough and especially so at the 1st fret.

To get good at this version, you will need to spend time perfecting the quality of your barre. This means using great technique and following the advice in this post on barre chords.

For example, how straight it is, how close to the fret it is and how high it is positioned, and then adding in one finger at a time to gradually complete the chord. Thankfully there are much easier ways of playing F. 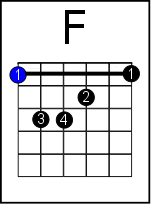 This is a tough old nut to crack for many guitarists. What you are doing here is playing a C Major chord shape with fingers 2, 3 and 4 and playing a barre across the top three strings with your index finger and placing this finger at the 5th fret).

It’s definitely a luxury shape and one that is suitable for intermediate guitarists but not ideal for beginners.

That’s because it is so tough and it isn’t used in that many songs (The intro to Red Hot Chili Peppers ‘Under the Bridge’ is probably the most famous example). 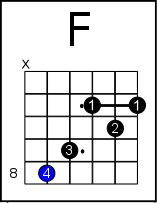 I like to play this chord in the following way. The trouble is your ring finger is the one doing all the work so it can be tough to play for some guitarists. 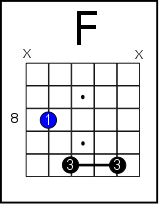 Some guitarists prefer to play this version using all four fingers as you can see in the version below. 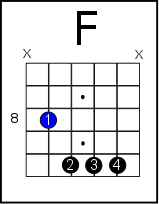 Me, I never liked this second version as it is clunky and although I don’t have the fattest fingers in the world (not that they would be an excuse), when playing up at the 8th fret I struggle to fit fingers 2, 3 and 4 in a line on the same fret.

Whichever way you choose to play this version, it is very handy. Mainly because it is a higher pitched version of F and therefore offers some different tonal options to the chord.

Here we have the same version as we have for shape 1 but this time we have moved the barre finger so it only frets the top two strings (B and high E) while fingers 2, 3 and 4 still fret the same notes. This is a useful version to practice when building up to shape 1. 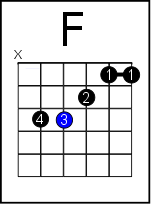 This version is very similar to the above version but is a fair bit easier to play for most guitarists and it sounds almost exactly the same.

My students much prefer to play this shape over that one because of those reasons.  The only time the above shape is better than this version is when you are picking and need the note on the high E string to be picked (which isn’t that often to be honest). 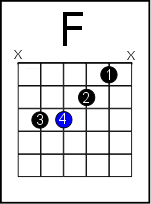 When playing this version, ensure your index finger which is on the B string is rocked back a touch to purposely kill off the high E string to stop it ringing out.

The change from F Major to C Major is a very common one in music and it is one many struggle with.

The great thing about this shape is that changing to and from C is fairly easy too.

When changing from F to C, simply leave your ring finger and index finger where they are, lift off the pinkie and move the middle finger to the D string.

It’s a smooth change when you have tried it a few times.

Our next version is one that I see that is commonly taught but it isn’t one that is that practical in the real world.

Technically, it is supposed to be easier than most shapes but in the real world it’s a tough old chord to play and doesn’t sound that great as there is no real strong bass in the chord unlike my well-loved shape 5. I’m not a massive fan of this shape but it may work for you. 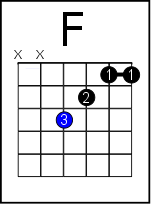 This is probably the ‘go to’ shape that everyone starts out with. That is because it uses just 3 fingers and there is no barring at all.

It’s a good shape to start out with but it can be difficult to strum as there are only 3 strings in the chord.

Therefore, you have to be careful when strumming that you don’t strum unwanted strings. I tend to only use this one when playing picking songs that only require these strings. 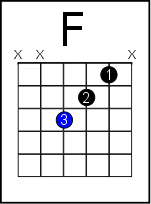 If you know this shape, I’d try to work up to shape 5 next for a bigger sounding chord.

Our last version is something a little different. It is a chord inversion. A chord inversion happens when we turn the chord around and basically make the bass note any other note other than the root. (I’ll do a lesson on these in the future).

They are a great way to add sophistication to a chord. The trouble is that they don’t sound great being strummed so learn this shape and do a bit of picking on it—they tend to sound classier and more interesting when picked either with a pick or with some cool fingerpicking patterns. 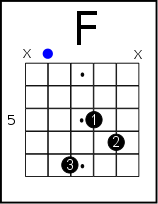 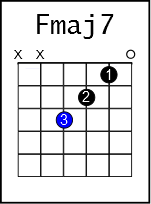 Be careful with this F Major 7 chord. A lot of guitarists play this in place of an F Major chord but the thing is that the F Major 7 is a different chord.

Although it is very, very similar to the F Major, the E note on the open high E string brings a different summer-like or jazzy (depends on context) flavour to the chord.

Therefore, use this F Major 7 wisely and most importantly understand that sometimes it will work in place of a normal F and sometimes it won’t. Not making the distinction between the two is a little trap a lot of beginners make.

A few of the above shapes use barre chords. Now, if barre chords are tough for you at this stage, learn the easier versions and work your way up to the full barre chords. (I’ll be officially releasing my barre chords course soon which will help solve your barre chord issues).

Get learning the F Chord!

As a roundup, if you are a beginner, start with shape 7 and then work your way up the list so eventually you can play them all.

Shape 2 is a luxury but one that I recommend you give a go once you are comfortable with the rest.

The chord of F is probably the first chord that really gives a beginner a lot of bother so take your time and try out a few of these. Find what works best for you and what you like the sound off and then get learning one of the above songs using it.

Also, once you have learnt how to play all these chords, you have to get good at changing between the chords.

For more help on this subject, check out my book or course both dedicated to the subject.

Once you can play all these shapes, that will be a great sign your guitar playing is massively improving.

Don’t forget to leave a comment and let me know what your favourite way to play F is and feel free to share any tips for other readers or ask any questions on this subject.

Hopefully, you have now seen there are variety of different ways to play this chord and they are all suitable for a variety of skill levels.