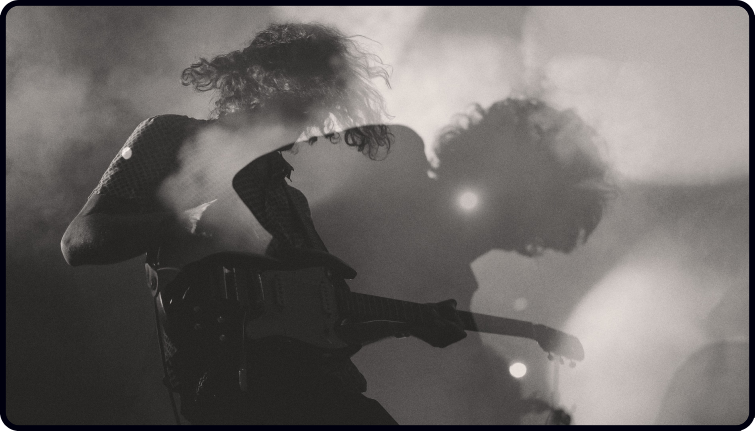 It was 1959 and Robert Zimmerman was sitting wearing his James Dean-style leather jacket daydreaming about being born in another time.

He dreamt of being a military leader, and he felt destined for bigger things than his dusty little hometown had given him.

The newspapers were boring, life was quiet, and Buddy Holly had just tragically died.

Young Robert needed a change – a big one.

He wanted to be a one-man band, free from the shackles of a small town, and free to direct the audience to himself, his tunes, and his message.

Thus, he created himself an alter-ego, and what was to be one of the most iconic ones ever.

Over the next two years, Robert, who was a folk singer-songwriter, would start his transformation.

First, he ditched the leather jacket, then he schooled himself with some of the best folk records and musicians around.

He went on the search for Woody Guthrie, wrote tales and songs about catching trains, being a farmhand…

Learning guitar from a one-eyed bluesman and playing slide guitar with a switchblade (both of which were fictional).

In ‘61 he reached New York a changed man and the myth and legend was born.

This is a bit extreme, as for me the album Highway 61 Revisited was his greatest creation, but I can see where he was coming from.

It is a cool bit of history and shows the power of big thinking, i.e. dreaming big and not being afraid to be somebody.

So often with guitar playing, guitarists are a little timid.

They lack a lot of self-belief and use the things that happened previously in their life as a benchmark of what will happen in the future.

If they tried guitar (or anything else in the past) and failed, they feel they are destined to fail again.

I know 99% could care less about being a superstar like Dylan, I’m the same. That’s because…

We all just want to have more fun, and play some great music, but…

Thinking bigger and dreaming big when you pick up the guitar is pretty cool.

Maybe the next time you pick it up and have nagging self-doubt, you could create your own superstar persona of being the guitarist you want me to be – backstory and all.

Could you be the railroad folk hero, or the free-spirited fingerpicker from the 60s, maybe even the cool Led Zeppelin style Rockstar?

It’s all a bit of fun, but believing in yourself is key.

A little daydreaming can be inspiring, a bit of mental creativity is fun, and it never hurt the career and music of the great Robert Zimmerman/Bob Dylan.

Try it and have some fun!

P.S. If you want inspiration and need some guidance so you can become the guitarist you want to be, check out my membership programme. It is where I invest most of my time for students who need help the most.